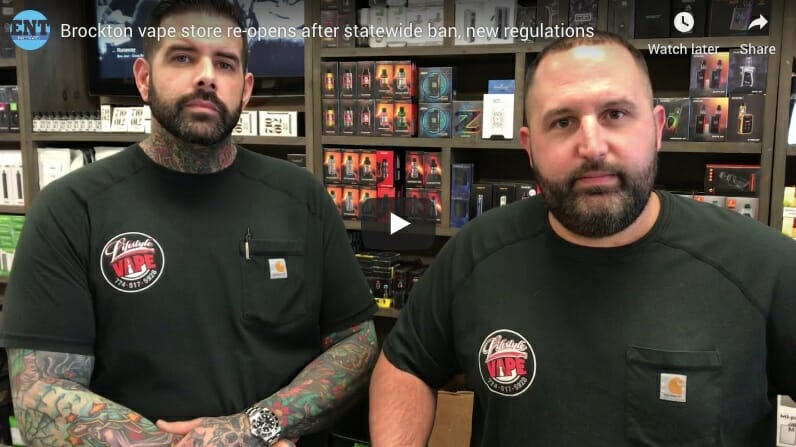 A statewide ban on the sale of all vape products forced stores throughout Massachusetts to close their doors. Now specialty vape shops, including Vape Lifestyle in Brockton, Middleboro and Randolph, are opening back up again and trying to reinvent themselves in light of new taxes and restrictions, including the complete ban on flavored vape products.

After a statewide ban on the sale of all vape products forced them to close down for three months, and new restrictions on e-cigarettes were established, the co-owner of a Brockton-based business said he and his partner are trying to “come up from the ashes of what’s left of this industry.”

Lifestyle Vape re-opened its stores in Brockton, Middleboro and Randolph after an emergency ban on vape sales declared in September by Gov. Charlie Baker ended on Wednesday. However, while the ban on all vape product sales ended, the stores are facing new sweeping regulations, including a complete ban on flavored products that remains in effect, and a new 75 percent wholesale tax on vape products, also known as e-cigarettes, that will begin in June next year.

Rich DeCotis, co-owner of Lifestyle Vape at 1280 Belmont St., said that the business is being forced to re-invent itself with a new inventory of tobacco and marijuana-related products, including glass pipes, water pipes and rolling papers, alongside non-flavored and original tobacco-flavored vape products. DeCotis said he hopes that the rise of the legalized marijuana industry in Massachusetts, including the nearby In Good Health store that recently began selling marijuana for recreational purposes, will contribute to the success of his newly reconfigured local business.

“To stay alive and to make a smart business decision, we have to pivot into the products that people need for the recreational marijuana,” said DeCotis, who is soft spoken yet muscular, with arms covered by tattoos. “It’s going to be a hybrid shop now.”

Rewind | E-cigarettes are NOT safe and vaping harms health, World...

Curate RegWatch
That's the conclusion of the World Health Organization - as they issue their latest, hard-hitting warning about vaping. The authority said that...

Early Signs of Vaping Health Risks Were Missed or Ignored

European policymakers are starting to see the light