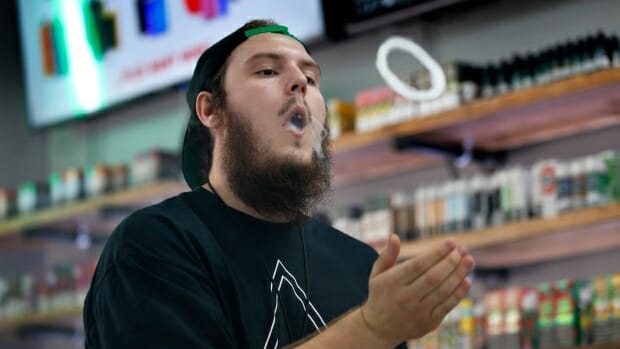 A growing move to ban flavoured e-cigarettes due to health concerns particularly in youth could actually benefit convenience stores in the long run, say retail analysts.

“We believe the FDA’s plan to remove mint/menthol e-cig flavours (in addition to all other non-tobacco flavours) would without question encourage a return to combustible cigarettes,” Bonnie Herzog of Wells Fargo Securities wrote in a report after conducting a survey of retailers.

Almost half of the retailers believe the removal of flavoured e-cigarettes won’t help to reduce youth usage as kids likely move to the black market. Yet some 40 per cent of retailers say they are seeing some deceleration in Juul sales and nearly 20 per cent are seeing more combustible cigarette sales as news reports increase about health issues with vaping.

Some U.S. states are moving to ban or curtail vaping but Herzog said she is “cautiously optimistic” that a complete ban on e-cigarette flavours will be imposed by the Food and Drug Administration.

Quebec health officials confirmed Friday the province’s first case of severe pulmonary illness linked to vaping. That followed a report from the Middlesex-London Health Unit that a teen from London, Ont., who was using e-cigarettes daily, suffered a severe case of pulmonary illness, the first confirmed case of vaping-related lung disease in Canada.

Herzoz added that 67 per cent of retailers believe the removal of e-cigarette flavours would increase the competitive advantage of IQOS, a heat-not-burn cigarette alternative made by Philip Morris International that has received FDA premarket approval.

Even if e-cigarettes aren’t banned outright, large convenience store chains such as Alimentation Couche-Tard would be helped in the long-term by increased regulations of e-cigarettes because they have the ability to absorb the additional costs, wrote RBC Capital Markets analyst Irene Nattel in a report.

“Given cost of compliance/administrative burden associated with regulated products…we’d expect chains with financial flexibility to gain share over time, not unlike what happened to breweries during the last century,” she wrote.

Tobacco represents about 38 per cent of merchandise store sales at convenience stores and about 40.5 per cent at Couche-Tard, Nattel said. However, electronic devices represent less than 25 per cent of other tobacco products, which account for less than 20 per cent of tobacco sales

Couche-Tard CEO Brian Hannasch said that while these products aren’t currently “material” to its revenues, the Quebec-based retailer hopes they remain available for adults to give smokers “an avenue of lower risk as they pursue nicotine.”

The company only sells closed vaping systems that already contain liquid, instead of ones that allow consumers to use their own liquids.

“We know there’s demand there but if flavours are attracting children we’re OK with it going away,” he told The Canadian Press after its recent annual meeting.

“It’s the right thing for society and we just want it to be done on a thoughtful fashion and based on facts.”

This report by The Canadian Press was first published Sept. 27, 2019.

High school seniors who used e-cigarettes may have otherwise been cigarette...