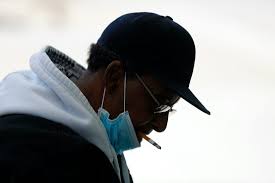 The havoc wreaked by the COVID-19 pandemic is twofold: in addition to suffering direct effects of the virus, the world is grappling with the challenge of social distancing.

The mental and physical toll of this practice may be particularly profound for millions of smokers who, as a way to cope with stress, have increased their tobacco intake.

A recent poll explores the relationship between COVID-19 social distancing and health among 6,801 tobacco and nicotine users in 5 countries (United States, United Kingdom, Italy, South Africa, and India). Released today by the Foundation for a Smoke-Free World, the survey found that more than two thirds of the respondents rely on tobacco and nicotine as their main tool to manage stress and anxiety. Nearly 40% of smokers increased use of these products in recent weeks, which could equate to elevated use by more than 50 million smokers in the five countries polled.

Stress and anxiety leads to rise in tobacco use
As governments begin to loosen social distancing guidelines, the mental and effects of lockdown are becoming apparent. Survey respondents consistently noted that social distancing had an adverse impact on their mental health (India, 35%; Italy, 29%, South Africa, 24%; UK, 39%; US, 43%), with many reporting concern about falling ill, being hospitalized, and managing stress and anxiety.

Negative effects on mental health were nearly twice as common among respondents who either tested positive for COVID-19 or lived with someone who had contracted the virus (India, 75%; Italy, 56%, South Africa, 45%; UK, 68%; US, 76%). The mental health impacts were also generally higher among women than men.

“When this pandemic curve subsides, there will be a heavy mental and physical toll on all people,” said Dr. Derek Yach, president of the Foundation. “Prior to the COVID crisis, smokers were at greatest risk of lung cancer, chronic lung disease, and heart attacks. They will continue to have these excess risks as the pandemic recedes. Never forget that 7 million people will die globally this year as a result of their tobacco use.”

Unhealthy coping mechanisms in the face of a global pandemic
Unhealthy habits are common in times of extreme stress and can be particularly dangerous for tobacco users. Survey respondents cited nicotine and tobacco as standard coping tools prior to the pandemic (US, 69%; UK, 68%; Italy, 48%; South Africa, 66%; India, 58%). As a result, many of these respondents either maintained or increased use of these products during stay-at-home orders (US, 57%; UK, 44%; Italy, 45%; South Africa, 64%; India, 74%). Higher rates of use were most prominent in countries where authorities had placed bans on the purchase of tobacco and alcohol (Indian and South Africa), which could suggest altered buying habits among respondents in those countries.

In fact, many combustible tobacco users reported a fear that stores would run out of their preferred product. This fear, coupled with anxiety that the lockdown would prevent users from going to the store, reportedly motivated cigarette smokers to stockpile tobacco products (US, 45%; UK, 38%; Italy, 33%; South Africa, 32%; India, 50%).

Healthy coping tools also being used
In addition to changes in the use of tobacco and nicotine products, the survey also revealed some healthy behavioral adjustments. With the closure of bars and restaurants, almost half of respondents in Italy and the UK reported that they have reduced their alcohol intake. Across all countries, about 45% of respondents reported that they normally use physical activity as a means to deal with stress and anxiety. In India, where lockdown precluded outdoor activity, over half of respondents sought out other healthy coping strategies, such as breathing exercises, meditation, and yoga.

Looking to the future
The survey indicates that the pandemic has increased focus on personal health and motivated some smokers to quit. Of those surveyed, many smokers considered quitting all products (Italy, 37%, South Africa, 51%; UK, 37%; US, 41%), and those numbers were 11-42 percentage points higher in households where someone had tested positive for the virus. However, far fewer have actually attempted to quit (Italy, 18%, South Africa, 36%; UK, 21%; US, 27%). One bright spot was India, where 66% of smokers indicated they had considered quitting and 63% had followed up with a quit attempt. Still, these findings suggest that millions want to quit but have not identified a cessation strategy that they believe would work amidst lockdown (India, ~2.6M; Italy, ~2.4M, South Africa, ~1.9M; UK, ~2.3M; US, ~8.4M). Indeed, the reported discrepancy between quitting consideration and quitting attempts highlights the need for more effective options for smokers.

“Stay-at-home restrictions have provided insights into how we could support smokers to quit,” Derek Yach added. “We need to encourage them empathetically to move away from combustibles by educating them about patches, gum, and e-cigarettes that are less harmful than smoking, while making sure these tools are readily available. If we do that, smokers could exit the lockdowns with better prospects for their future health.”

The “COVID-19 State of Smoking Poll” was conducted online by the Nielsen Company for the Foundation for a Smoke-Free World during the period starting April 4 and ending April 14, 2020. Survey respondents were from the United Kingdom, Italy, South Africa, India, and the United States (New York, and California), were between the ages of 18 and 69 and were regular smokers of combustible tobacco or users of nicotine vape products.