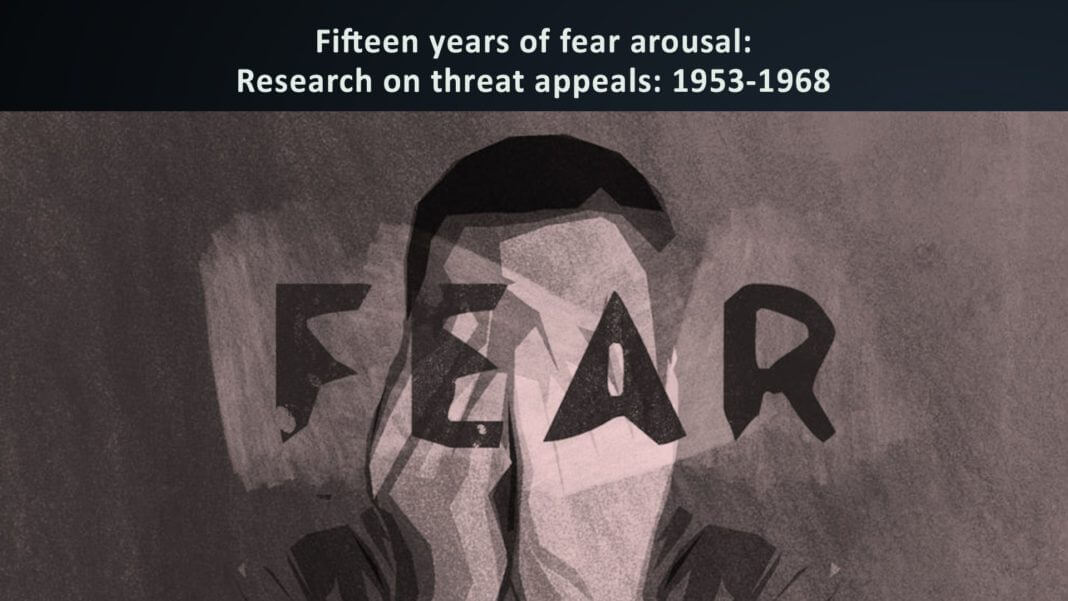 Research on threat appeals has yielded conflicting findings concerning the relative effectiveness of high threat versus low threat in persuasion.

Studies reviewed here have investigated the effects on persuasion of variables in each of five areas: (a) the nature of the recommendations, (b) personality characteristics of the recipients, (c) source credibility, (d) learning of the message content, and (e) the interest value of fear. Few variables have been found which consistently interact with fear. One conceptual consideration and four methodological considerations are suggested as possible sources of the inconsistency in the findings. A postulated curvilinear relationship between fear level and persuasion may help reconcile some of the conflicting findings on high- versus low-threat appeals.

The use of threat, or fear arousal, is quite common in many types of persuasive attempts. The procedure generally used is either to associate an undesirable practice (e.g., smoking) with negative consequences (e.g., lung cancer), or to associate a desirable practice (e.g., brushing teeth) with the avoidance of negative consequences (e.g., cavities). Then, after making the association, recommendations are offered for attitude change or for action to take to avoid the consequences. Typically the projected consequence of not conforming to the communication’s recommendations is spelled out in vivid, threatening detail. The assumption is that the higher the level of fear aroused, the greater will be the persuasiveness of the communication.

Areas of persuasion which use such a “scare” technique might include public-opinion campaigns (e.g., safe-driving, health, and anti-smoking campaigns), propaganda efforts (e.g., atrocities committed by the enemy in war), advertising (e.g., mouthwash, toothpaste, and deodorant advertisements), and preaching (e.g., hellfire and damnation for sinners).

However, despite the widespread use of threat appeals in applied settings, the technique has only recently come under much rigorous experimental investigation.

Curate RegWatch
Michele Mital, the current deputy director of the Food and Drug Administration’s Center for Tobacco Products (CTP), will become its new...