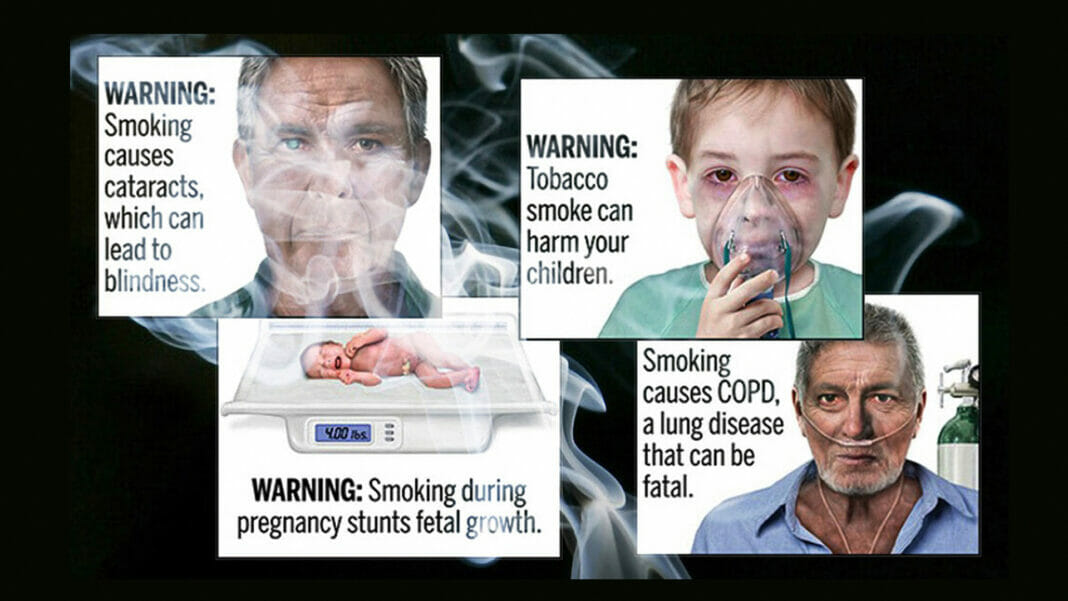 Graphic photos showing the severe consequences of smoking, which will be printed on all cigarette packages in the U.S. beginning in Oct. 2022, will save an estimated 539,000 lives over the remainder of this century, new research by the Yale School of Public Health and its partners finds.

But if a new rule requiring this vivid imagery had been implemented in 2012 as originally planned — only to be derailed by lawsuits and other delays — an additional 179,000 deaths would have been averted from smoking-related diseases, the researchers say.

“There was a lost opportunity here and people suffered as a result,” said Jamie Tam, assistant professor in the Department of Health Policy and Management at the Yale School of Public Health and the study’s lead author. “When tobacco industry litigation and delays with the [U.S. Food and Drug Administration] keep evidence-based policies from being implemented, public health pays a heavy price.

“These much-needed warnings could not come soon enough,” Tam added. “Many countries around the world already have graphic health warnings on their cigarette packs, and they’ve saved many lives by doing so. It is past time for the U.S. to catch up.”

The findings are published in the journal JAMA Health Forum.

Beginning next October, following numerous delays due to tobacco industry lawsuits, extensions related to COVID-19, and other challenges, a new U.S. Food and Drug Administration (FDA) rule will require that warnings be posted on all cigarette packages and advertisements. According to the rule, warnings must be printed on the front and back of each package and cover 50% of the packaging. These warnings will include a variety of 13 disturbing images that depict the consequences of tobacco use, including lung disease, neck cancer, reduced blood flow, and heart disease. Others consequences depicted will include cataracts, erectile dysfunction, a reduction in fetal growth, and Type 2 diabetes.

“These warnings are designed to grab attention and make people think twice about lighting up,” said Rafael Meza, a professor at the University of Michigan and the study’s senior author. “The consequences of smoking are dire. Fortunately, they can be prevented if people quit smoking.”

The research team created a simulation model of smoking prevalence and smoking-attributable mortality in the United States from 2012 to 2100 using data from the Cancer Intervention and Surveillance Modeling Network. The upcoming policy and its simulated impacts on population health can be explored in detail online through the Tobacco Control Policy Tool.

According to the Campaign for Tobacco-Free Kids, 120 countries around the world already have graphic health warnings on cigarette packs. In Canada, which became the first nation to do so in 2001, these graphic images cover 75% of packaging.

Curate RegWatch
A paper on e-cigarette taxation that ignores the impact on demand for cigarettes misses the main point CLIVE BATES I would like to...

MEP: E-cigarettes have a place in EU cancer plan, but we...