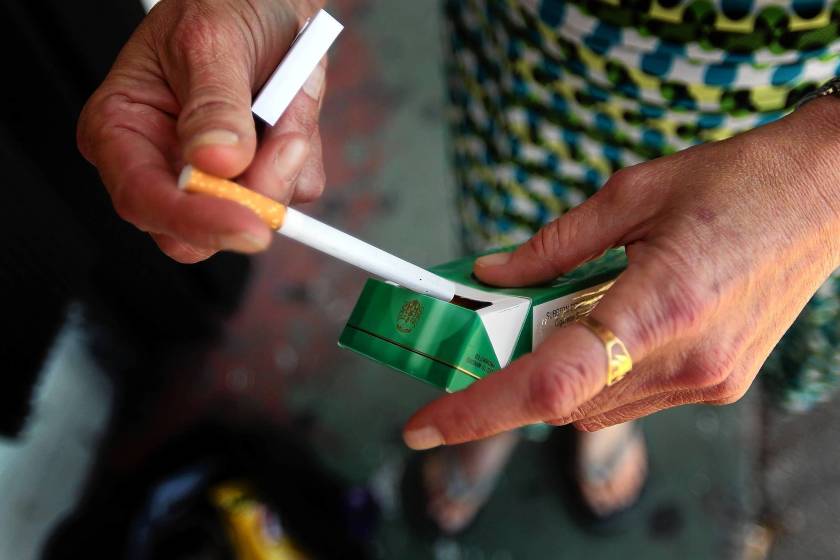 Supporters of legislation to ban the sale of flavored tobacco in California are speaking out against a new advertising campaign from tobacco companies that claims the bill discriminates against Black and Latino smokers, saying that the ads disingenuously portray the industry as an ally of communities of color.

The tobacco industry ad, which calls the bill “politics at its worst,” alleges that the measure would criminalize menthol cigarettes, “giving special treatment to the rich, and singling out communities of color.”

Advocates for the bill have blasted those claims as inaccurate, responding with another ad that argues flavored tobacco products have been heavily marketed to communities of color and pose disproportionate health risks to Black residents.

On Monday, a group of Black leaders, including academics, and youth activists held a press conference on Zoom to denounce the opposition ad campaign as an attempt by the tobacco industry to deceive lawmakers and the public.

“It’s critical that the Black community and particularly the Black faith community stand up to the lies, misinformation and the fake news that is being promulgated by big tobacco,” said the Rev. John E. Cager III, pastor of the Ward African Methodist Episcopal Church Los Angeles.

The measure, Senate Bill 793, was introduced by state Sen. Jerry Hill (D-San Mateo) partly in response to a surge in the use of electronic cigarettes by minors who are attracted to candy- and fruit-flavored vaping products. In 2019, some 5 million middle- and high-school students reported having used e-cigarettes in a recent 30-day period, an increase from 3.6 million the year before, according to the National Youth Tobacco Survey released by the federal Centers for Disease Control and Prevention.

California would be the second state after Massachusetts to ban flavored tobacco and would follow many local jurisdictions, including Los Angeles County, that have already taken that step.

SB 793 cleared a key hurdle on Thursday when the Assembly Appropriations Committee sent it to the Assembly floor for a vote, despite a warning by the state Department of Tax and Fee Administration that such a proposal could cost $218 million next year in lost tobacco-related taxes.

The California Legislative Black Caucus has not taken an official position on SB 793, but four of the eight members have either voted for the bill or signed on as co-authors.

“Flavored tobacco is a gateway to a lifetime of addiction with tobacco being one of many destructors of Black health,” said state Sen. Holly Mitchell (D-Los Angeles), a member of the caucus, in a statement after she voted for the bill when it passed the Senate.

Assemblywoman Autumn Burke (D-Los Angeles), who is also a member of the caucus, voted for the bill in committee but added that she would like to see more efforts that deal with the root causes of poverty, which is directly tied to tobacco use.

“I see folks banging a drum that claims to protect Black and brown people, but once again criminalizing their choices when we should be creating opportunities and incentivizing better choices,” Burke told her colleagues during a debate.

At a state Capitol hearing on the bill earlier this month, some 200 people on both sides of the issue testified.

The argument that the bill would cost the state tax revenue did not sway bill supporters including Cager.

“I don’t want the state to collect blood money on the back of dead African Americans,” he told the legislators at the hearing.

Rev. K.W. Tulloss, president of the Baptist Ministers Conference of Los Angeles and Southern California, told lawmakers he does not want kids to smoke, but said he opposes the bill because of its ban on menthol products, which he noted are popular with Black smokers, while exempting hookah, premium cigars, and some pipe tobacco.

“What we see here is this bill disrespects our community of color and their preference, while it exempts hookah products on behalf of the Middle Eastern cultures,” Tulloss said. “If you put a ban on menthol, it will criminalize this product.”

Other opponents of the bill, which include the California Black Chamber of Commerce and Bishop R. Terrell Douglas, Sr., president of the Inglewood Ministerial Alliance, say they worry that outlawing the sale of menthol tobacco products could lead to more confrontations between police officers and young Black men. Tulloss cited the case of Eric Garner, a Black man who died in police custody in New York in 2014 after he was stopped for allegedly selling single cigarettes on the street.

The television ad by the tobacco industry, which was paid for by RAI Services Co., an affiliate of tobacco giant Reynolds American, turned up the heat on the debate by alleging the bill “criminalizes the sale of menthol cigarettes, the choice of Black and Latino smokers.”

The ads have infuriated some Black leaders, who say they are a cynical tactic by the tobacco industry and do not represent the opinions of many Black residents in California.

Dr. Valerie Yerger, a founding member of the African American Tobacco Control Leadership Council, and an associate professor in health policy at UC San Francisco, said the tobacco industry has targeted the Black community for marketing of menthol increasing the damage done to the health of Black people.

“SB 793 is not a racist policy,” Yerger said during Monday’s news conference. “It will save lives and reduce health care costs, especially for African Americans.”

The tobacco industry has spent more than $3.1 million lobbying in California during the last year and a half, including $1.8 million spend by Reynolds and tobacco firm Altria.

Juul Labs, a leading e-cigarette maker, and industry group Vapor Technology Assn., spent a total of $1 million more on lobbying during the period. The Cigar Assn. of America paid lobbyists $144,000, while the Premium Cigar Assn. spent $84,000, and the Hookah Chamber of Commerce had $50,000 in lobbyist bills.

When a similar bill stalled last year, the American Cancer Society Cancer Action Network reported that the tobacco industry had given more than $2.2 million in campaign contributions to state officials since 2014.

Hill disputes the argument that his legislation will lead to more police conflicts with smokers in communities of color, saying the ban is on sales by retail stores. Nothing in SB 793 makes it illegal to possess menthol cigarettes, he said, so police officers would have no reason to stop people on the street.

“Tobacco companies have been allowed to market their deadly products in our communities without regard for Black lives and health for far too long,” he said. “California’s lawmakers must join us and protect the next generation of Black and brown lives from deadly nicotine addiction.”

Supporters of the bill cite findings by the Centers for Disease Control and Prevention that tobacco use is a major contributor to the three leading causes of death among Black people — heart disease, cancer, and stroke. According to the U.S. Food and Drug Administration, 85% of all Black smokers smoke menthol cigarettes, with studies showing that menthol makes it easier to start tobacco use and harder to quit.

U.S. Rep. Karen Bass (D-Los Angeles), chairwoman of the Congressional Black Caucus, is among the supporters of Hill’s legislation.

“Recent incidents of police brutality against Black Americans have forced our nation to confront racism and injustice in its many forms,” Bass wrote in an op-ed column in the Sacramento Bee. “As we continue to push to protect Black lives, we must put an end to one of the most pernicious destroyers of Black health and lives: deadly menthol cigarettes and the tobacco industry’s decades-long targeted marketing to our kids and communities.”

A coalition of health and community groups called the Tobacco-Free Kids Action Fund responded to the Reynolds American ad with its own television spot that played extensively on Sacramento stations this week.

In the ad, spoken word artist SixFootah the Poet says that “menthol cigarettes put my mother in the ground,” challenging lawmakers to provide Black children “the same protection as the kids in the suburbs do.”

“So you want to ban all flavors except for the ones that take Black lives away?’’ she asks in the ad.

The coalition airing the ad includes the African American Tobacco Control Leadership Council, which is co-chaired by Phillip Gardiner, who is retired from the Tobacco Related Disease Research Program at the University of California Office of the President.

Gardiner said he doesn’t think hookah and premium cigars should be exempted, but he dismisses the argument that a ban on menthol is discriminatory against the Black community.

“Frankly, at this time nothing could be more helpful in saving Black lives and ensuring that Black lives matter than getting menthols and flavors out of California,” he said.

Master Settlement Agreement and Its Impact on Tobacco Use 10 Years...

Venezuela Takes The Lead On Vaping