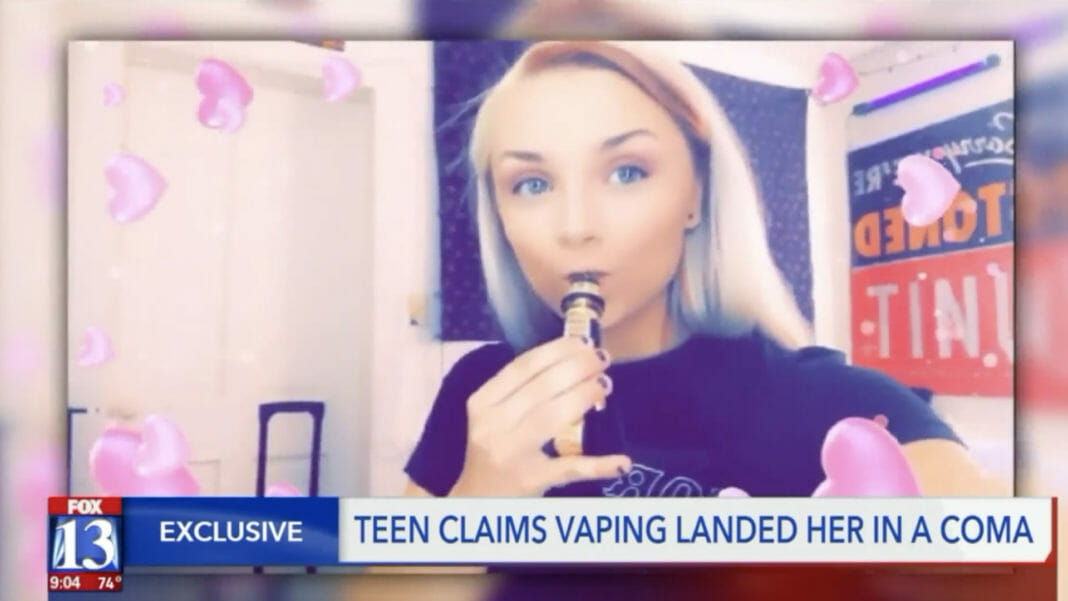 A Utah teenager who says vaping landed her in a medically-induced coma is sharing her story as reports of breathing illnesses linked to e-cigarettes or other vaping products rise across the nation.

Maddie Nelson of Nephi was an otherwise healthy 18-year old who said she vaped every day for three years, posting pictures and videos on social media.

“I thought vaping was fine,” Nelson told KSTU. “I did all the tricks, all the time.”

Nelson said she became mysteriously ill in late July and had to go to a hospital in Payson.

“My temperature was so high, my brain just completely shut off,” she recalled. “I thought I was in the Payson hospital for one night, and I was actually there for four days.”

Nelson was transferred to Timpanogos Regional Hospital in Orem, where she said she was put into a medically-induced coma for three days in the intensive care unit. She said doctors there figured out what was wrong.

“I had fat particles growing inside my lungs that were related to the glycerin in vape juice,” Nelson explained. “So then my lungs were full of fluid. They said that my chest X-rays was one of the worst they’ve ever seen.”

“When you inhale the moisture, it’s just creating the perfect environment for bacteria to grow inside your lungs and for infection to start,” she said.

At one point, Nelson said her family thought she had passed away and “when I found that out, it just made me so sad.”

Nelson said she’s doing much better but still needs to use oxygen at night.

“It’s very scary, because the doctors don’t know the long term effects of this,” she said. “So they don’t know what the healing process is even supposed to be like.”

Brent Stafford
It’s simply astonishing. New studies are showing that current smokers have a significantly lower risk of COVID-19 death than both never-smokers...

MEP: E-cigarettes have a place in EU cancer plan, but we...

FDA’s Center for Tobacco Products: 10 Years of Compliance and Enforcement

Peer Review: The Worst Way to Judge Research, Except for All...