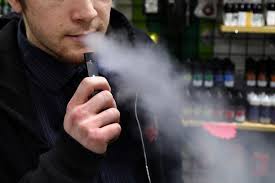 Higher nicotine content in Canada compared with U.K. is blamed for rising use

New research reveals vaping among Canadian youth has risen dramatically over the past two years, and experts say it shows no signs of slowing down unless stricter regulations are put in place immediately.

A survey of more than 12,000 Canadians aged 16 to 19, done in three groups between 2017 and 2019, found that the number of those who reported vaping in the previous month had more than doubled to 17.8 per cent from 8.4 per cent in 2017. The results were published in the journal JAMA Pediatrics this week.

“That is stunning, and there needs to be pressing action by federal and provincial governments to reduce youth vaping through a series of measures,” said Rob Cunningham, a senior policy analyst with the Canadian Cancer Society.

David Hammond, a public health professor at the University of Waterloo who led the youth study, which also looked at rates of vaping in the U.S. and U.K., found similar trends among American — but not British — young people.

Curate RegWatch
Electronic cigarettes may soon become much more widely available in the world’s largest tobacco market: The People’s Republic of China. With...

Is vaping dangerous or not? And is the World Health Organisation...