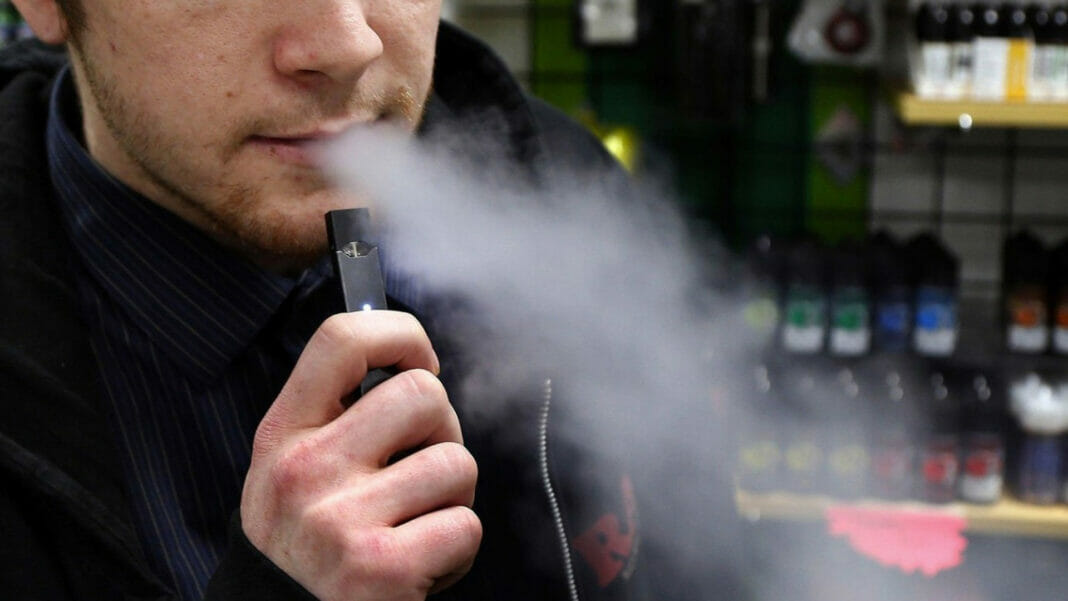 It was a pivotal public health crisis in America before the Covid-19 pandemic — and then we stopped talking about it.

E-cigarettes became ubiquitous in high schools across the country, resulting in scores of teens addicted to nicotine. And though industry leader Juul Labs denied that was ever its intent, the company landed front-and-center in a heated debate.
In recent years, Juul, which once held the majority of the US e-cigarette market, has been embattled in a deluge of lawsuits and investigations into its products’ appeal to kids. The company says it’s engaged in an “ongoing effort to reset our company … as we continue to combat underage usage and advance the opportunity for harm reduction for adult smokers.”
But Juul’s products are just a few among millions that are now in regulatory limbo with the US Food and Drug Administration. And this fall could bring decisions that some experts say are long overdue.

E-cigarette products have been allowed to remain on the market for years, even though none have been given the official green light by the FDA. But a key deadline is looming.
Previously, a July 2019 court decision placed a 10-month deadline on e-cigarette companies to apply to the FDA for public health review. Any products that missed the May 2020 application deadline could have been pulled from the market by the FDA, while those that did apply could stay on the market for up to a year while under review.
Then came Covid-19 — and a four-month extension of that deadline to September 9, 2020.
“Nine months have now passed since that September 2020 deadline and we have received thousands of submissions for millions of new tobacco products,” said FDA’s acting commissioner, Dr. Janet Woodcock, in a congressional testimony late June.
More than 550 companies have now submitted over 6.5 million tobacco products to the FDA, all but a sliver related to e-cigarettes. Juul has submitted applications for just five of those products.
According to Woodcock, most of the products in the regulatory pathway known as PMTA — or Premarket Tobacco Product Applications — are evaluated in a random order, using computers to line up candidates. But in this case, with so many products in the pipeline, the FDA has carved out a separate queue for those that “account of the vast majority of the current market,” she said.
An FDA spokesperson told CNN in an email that the agency is “working to review applications as quickly as possible. However, given the unprecedented number of applications … the likelihood of FDA reviewing all the applications by Sept. 9, 2021 is low.
“With that being said, as with all unauthorized products generally, if products are not authorized by September 9, 2021, and do not come off the market at that time, they risk FDA enforcement.”
Experts say the outcome is far from preordained.
Unlike some product reviews whose only data comes from research trials, in this case there’s plenty of real-world experience, according to Matthew L. Myers, president of the Campaign for Tobacco-Free Kids.
“At this point, I think all of us are speculating and reading tea leaves,” he said.
Myers called for more transparency surrounding the authorization process and believes the FDA’s actions on e-cigarettes “will, over the long term, define how FDA is perceived.”
Until those decisions are announced, health and industry advocates alike are keeping a close eye on market leaders like Juul as a potential harbinger of what’s to come.
Gregory Conley, president of the American Vaping Association, said “the agency’s views on Juul’s menthol flavor, nicotine levels, and its embrace of strict marketing controls is absolutely something that the rest of the industry will be watching.”

“After a long, relatively quiet period, things are really heating up,” said Dr. Robert Jackler, founder of the Stanford Research into the Impact of Tobacco Advertising.
For Juul, it’s not just about awaiting the FDA’s decision, but also addressing a number of lawsuits against the company. For one, Juul recently agreed to pay $40 million to settle a two-year-old lawsuit with North Carolina — the first state lawsuit that alleged it marketed to teens.
The company said the settlement was consistent with its “reset” — one that goes back to late 2019 after a change in leadership. Under a new CEO, K.C. Crosthwaite, Juul took a number of actions that included removing flavored products from the market and scaling back its advertising and lobbying efforts. (Crosthwaite was a former executive of Altria, a tobacco company which in late 2018 had purchased a 35% stake in Juul, worth $12.8 billion.)
In an email to CNN, a Juul spokesman described the company’s efforts more broadly to “reset the vapor category” in the US by working with officials toward its goals of “transitioning adult smokers away from cigarettes, eliminating their use, and combating underage usage of our products.”
In an earlier statement, Juul described the North Carolina settlement is “another step in that direction.”
Jackler says the settlement, to be paid over six years, may not be a huge financial blow to a large company, but the implications could be much broader.
“I think it’s informative that Juul chose to settle rather than take the risk of facing a jury right in the heart of tobacco country,” he said.
Jackler pointed back at the 1990s, when Mississippi became the first in a series of states to file suit against major tobacco companies. He described the initial settlement with Mississippi as “relatively modest, but it was the first of a cascade of things.” Most notably: the 1998 Master Settlement Agreement, which awarded a total of more than $200 billion to states.
How a potential green light from the FDA could impact ongoing litigation is unclear. Instead, that review hinges on a pivotal question: What is a product’s impact on public health?

In deciding whether to green-light certain vaping products, the FDA must decide their public health merit. Does the likelihood of smokers switching over to vapes outweigh the likelihood that others — especially young people — will start getting hooked on nicotine?
This is why the agency’s PMTA review focuses not only on things that come with the product itself — like ingredients, toxicology, manufacturing, packaging and labeling — but also on the “net public health impact of individual products at a population level,” according to the FDA spokesperson.
“For e-cigarettes, that includes considering uptake by our nation’s youth, possible benefits of decreased use of combustible tobacco products by adults, the potential negative health effects of dual use of both e-cigarettes and combustible cigarettes, and the possibility that e-cigarettes could be a ‘gateway’ product to combustible cigarettes for youth,” the spokesperson said, adding that any decisions we see this fall may not be the final word.
“Following any authorization, if the FDA determines that a product is no longer appropriate for the protection of public health, the agency has authority to take regulatory action, which could include withdrawing the marketing order.”
Cigarette smoking has been estimated to cause more than 480,000 deaths per year in the US. In allowing e-cigarettes to remain on the market, former FDA Commissioner Dr. Scott Gottlieb had said he wanted to leave the door open for adults who might use these products to quit smoking cigarettes.
Indeed, there is some evidence that adults who vape are more likely to quit cigarettes. Still, certain findings have also faced concerns that many adults become “dual users” — not quitting entirely but potentially smoking less, at least temporarily.
Even given the potential benefit to some smokers, “it can’t come at the expense of addicting a generation of kids on nicotine,” Gottlieb told CNN in late 2018.
The use of e-cigarettes among young people declined significantly from 2019 to 2020 but remains high. Nearly 20% of high schoolers and almost 5% of middle schoolers reported last year that they currently vaped — down from 27.5% and 10.5% in 2019. Most adolescent users have also reported using flavored products.
Data also show that disposable vapes are also on the rise among high schoolers who vape, growing from 2.4% in 2019 to 26.5% in 2020. These e-cigarettes are different from Juul’s, wherein only the pod is replaced. And they come in a variety of sweet and fruity flavors that FDA no longer allows in prefilled cartridges.
That may be one reason why kids are increasingly using disposable vapes, while Juul use has gone down. As one study puts it, “significant declines in [youth] use of the JUUL brand were countered by significant increases in use of other vaping brands.”
While flavors have come under scrutiny for their appeal to kids, proponents argue they can still be a useful tool in helping adult smokers quit. The FDA’s enforcement currently exempts tobacco and menthol in pre-filled cartridges — the two flavors that Juul has kept on the US market and are included in its applications to the FDA.
Another debate swirls around leaving menthol on the market, which critics said amounted to “watering down the flavor ban” announced by the Trump administration in January. In April, the FDA also announced it was taking steps to ban menthol-flavored cigarettes and all flavored cigars within the next year.
Between a potential menthol ban and the FDA’s consideration of lowering nicotine levels in cigarettes “to minimally addictive or nonaddictive levels,” Conley of the American Vaping Association said “we remain hopeful that the FDA will recognize that if these product standards are to benefit public health, current adult smokers need effective smoke-free products to switch to.”

Juul may not dominate the market like it once did, but it continues to take heat for earlier business and marketing practices — practices which later surfaced among a flurry of companies that have popped up in the years since.
Before Juul pared down its US products to tobacco and menthol, it came in flavors such as mint, mango and crème brûlée. The company also released pods in concentrations up to 5% nicotine at a time when most competitors came in 1% to 2%.
A number of companies boosted their own concentrations to mirror Juul’s success, according to Jackler’s research.
By combining nicotine — a bitter base in its natural form — with an organic acid, vape manufacturers like Juul have produced a “nicotine salt,” masking nicotine’s naturally unpleasant taste and creating higher-concentration products.
Juul, which also sells 3% nicotine pods in the US, has maintained that a 5% pod is designed to replace one pack of cigarettes in terms of the number of puffs and the nicotine strength. Nicotine concentrations are capped at lower levels in other countries, but no such limit exists in the US.
The company’s early marketing and social media campaigns were widely criticized for their popularity among teens — with user-generated Juul-related Instagram content continuing months after the company shut down its own social media accounts in late 2018.
Now, a number of newer companies have continued in that vein, with some catching the attention of federal agencies. Jackler’s own research last year highlighted how companies “exploited” the pandemic to sell their products, he previously told CNN.
Juul may not be directly responsible for these ads, but critics say the company’s ripple effect is still being felt — even if the broader vaping debate isn’t quite in the spotlight.
“We haven’t moved past this,” Dorian Fuhrman, co-founder of the group Parents Against Vaping e-cigarettes, told CNN’s Chris Cuomo last week. “[Juul] created a sexy new nicotine delivery system. And the kids flocked to it about five years ago. And this is personal to me.”
Fuhrman’s son, Phillip, became addicted to the company’s products when he was 14.
“We have a whole generation of kids who would have never vaped, they would have never smoked cigarettes, and now we have a generation of nicotine addicts,” Fuhrman said.

CAPHRA Calls Out Bloomberg On Their Grant-For-Policy Strategy

The shameful history of the anti-smoking crusade

Lesson for Canada | British Reaction to ‘No Comparisons’