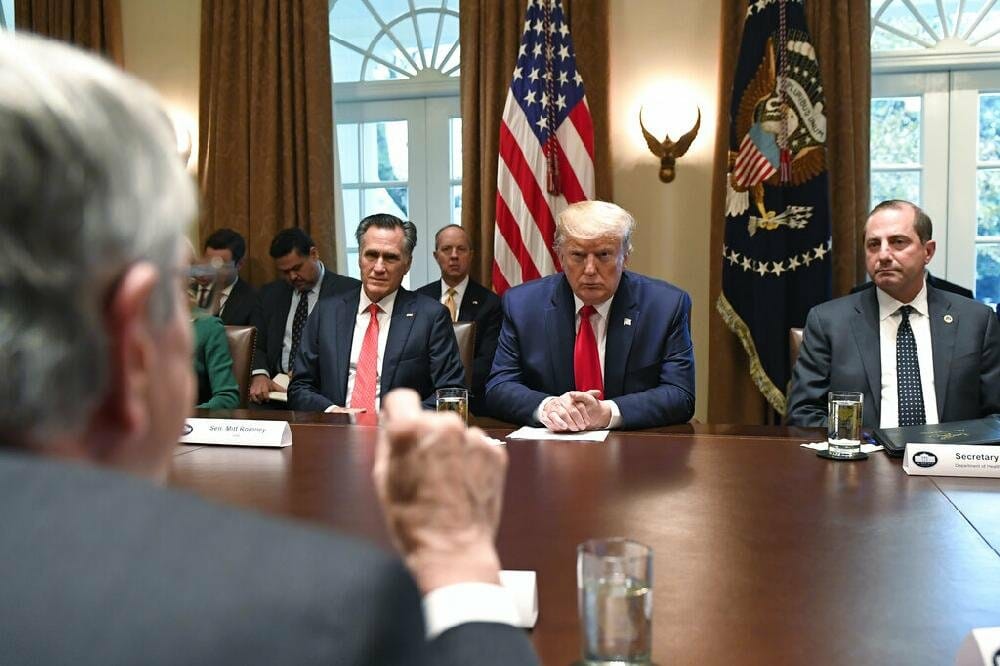 President Donald Trump pitted public-health advocates against vaping proponents and tobacco executives in an unusual White House meeting on Friday, as he considers whether to enact strict curbs on e-cigarette flavors.

The Trump administration has wavered on a proposal from Health and Human Services Secretary Alex Azar to ban all flavored vaping products except tobacco without approval from the Food and Drug Administration. The meeting came nearly two weeks after the president first said he’d meet with stakeholders in a tweet, and follows weeks of mixed signals from the administration about its plans.

During the extraordinary meeting, proponents and opponents of flavored vaping products openly argued with each other in front of the president and reporters invited to observe. The chief executive officer of Njoy Electronic Cigarettes, Ryan Nivakoff, accused the chief executive officer of market leader Juul Labs Inc., K C Crosthwaite, of deliberately marketing its products to children.

After listening to several of the participants, Trump said that he wants to “do something for everybody, where everybody’s happy.”

He indicated that he’s concerned an outright ban of flavored vaping products would create a black market. “If you don’t give it to them, it’s going to come here illegally,” he said.

But he also said his administration would raise the legal age to buy any vaping product to 21.

Groups participating in the meeting included the Vapor Technology Association, Americans for Tax Reform, American Academy of Pediatrics, American Vaping Association, Campaign for Tobacco-Free Kids, and Parents Against Vaping E-cigarettes, according to people familiar with the matter.

Just what shape any final policy changes could take — or whether any curbs will be adopted at all — is far from certain. After the initial proposal of a broad flavor ban was floated in September, the vaping industry pushed back, arguing tough restrictions could cost jobs and leave adult smokers without a valuable tool to help them quit cigarettes.

Public-health groups who’d cheered the proposed ban, meanwhile, have urged the president to put it in place.

The uncertainty has led to a battle to get the president’s attention. Earlier on Friday, the American Cancer Society Cancer Action Network ran an advertisement on Fox News calling for restrictions on flavored vaping products minutes before Trump appeared on the cable TV network for an interview.

At the meeting, public-health advocates raised concerns about rising rates of vaping among teenagers, while industry representatives warned Trump of job losses and alleged that their opponents are funded by the president’s political rivals.

Penny Young Nance, the CEO and president of Concerned Women for America, a conservative group, told Trump that her organization once thought vaping would help smokers quit cigarettes, but now supports a ban on flavored products and on advertisements for vaping products.

Greg Conley, the president of the American Vaping Association, told Trump during the meeting that many opponents of flavored vaping products are funded by Michael Bloomberg, who has taken steps to enter the Democratic presidential primary. Bloomberg, the majority owner of Bloomberg LP, the parent company of Bloomberg News, has campaigned and given money in support of a ban on flavored e-cigarettes and tobacco.

At one point, Conley told Trump that “these groups have 160 million reasons from Michael Bloomberg to not come to the table and compromise on anything,” referring to proponents of the ban.

One, Nance, fired back: “We do not and that is obnoxious.”

The president also heard from tobacco companies that have largely remained silent amid the noise around the long-awaited policy. Reynolds American Inc. sent its president and chief operating officer Joseph Fragnito, and Altria Group Inc. Chief Executive Officer Howard Willard attended, according to people familiar with the matter.

A representative for Juul declined to comment. Representatives for Altria and Reynolds didn’t immediately respond to requests for comment.

Juul, maker of the most popular e-cigarette device, has taken a series of steps to try to get ahead of any restrictions and ease concerns that its products have led to a surge in teen vaping. On top of slashing its marketing, digital, broadcast and print ads, the company has stopped selling its most popular flavors among youth users, mint and mango.

Juul has previously said it would halt all lobbying on any flavor restrictions.

After the allegation from Nivakoff, Crosthwaite told Trump: “What we’re focused on doing, Mr. President, is getting this back to a science-based process.”

He said the FDA is the most appropriate authority to determine which flavors should be allowed on the market.

“The kids, how about the children,” he said. “We have almost 6 million kids addicted to nicotine and they’re getting addicted because of flavors.”

Half the high-school children in Utah vape, he said. “They think they’re candy.”

“This is a kid product. We have to put the kids first,” Romney said, eliciting Trump’s promise to raise the legal age to buy vaping products to 21.

Matthew Myers, president of the Campaign for Tobacco-Free Kids, told Trump that children would turn to any flavor left on the market. He called Azar’s proposal “an extraordinarily powerful step in the right direction.”

Children began using mint-flavored products after Juul removed mango from the market, and Myers said they would likely turn to menthol if mint is removed.

“It’s one of those big Pandora’s boxes that we just can’t get out of,” he told Trump.

Another Challenge to FDA Could Be Heard by the Supreme Court