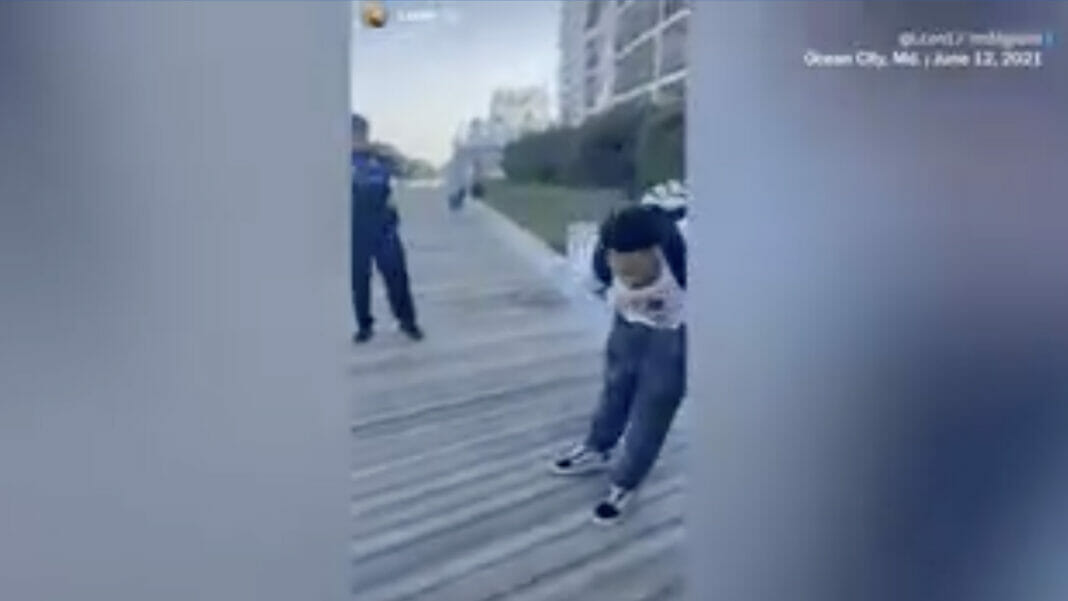 On Saturday evening on a boardwalk in Ocean City, Md., police enforcing a ban on vaping surrounded and tackled a teen as an agitated crowd gathered. Then, one officer repeatedly kneed the teen in the stomach.

“Stop resisting!” one of the officers yelled.

Later, police used a Taser on another man in the crowd and battled a third who picked up a bicycle.

The incident, which was caught in viral videos, left four teenagers arrested, authorities said. Ocean City officials pledged to review the officers’ actions but also noted in a news release, “Our officers are permitted to use force, per their training, to overcome exhibited resistance.”

But the videos left many people questioning whether police needed to use such force over a vaping ordinance.

Many also responded to a separate video, which shows a man on a boardwalk with his hands raised above his head who is suddenly hit by a police Taser. Many sharing the video, which has been viewed more than a million times as of early Monday, said the man was also stopped for vaping over the weekend in Ocean City. Police have yet to confirm those details.

Sherrilyn Ifill, the president and director-counsel of the NAACP Legal Defense and Educational Fund, in a tweet Sunday evening called on Maryland Attorney General Brian E. Frosh to investigate. And the ACLU of Maryland released a statement condemning Ocean City police officers for “show(ing) a complete lack of humanity towards these Black children” and said “these incidents are a manifestation of the white supremacy endemic to U.S. policing.”

Frosh said on Twitter on Monday that he watched videos of the incident and was “deeply concerned.” He added that he had “shared that concern with the appropriate law enforcement agencies.”

The videos are the latest flash point over how police use Tasers. In April, a police officer in Brooklyn Center, Minn., shot and killed 20-year-old Daunte Wright, an unarmed Black man, saying she mistook her handgun for a Taser. The officer, Kim Potter, who resigned from the police department after the shooting, was charged with second-degree manslaughter.

The Ocean City incident came in a city that has faced recent questions over its police force’s tactics on its tourist-packed boardwalk. Around this time last year, Ocean City police officials said they had opened a review after an officer was caught on camera wrapping his arms around a man’s neck during an arrest over an open alcohol container. In that incident, the officer appears to threaten the person recording the altercation with a Taser but does not appear to use one.

“We understand the public’s concern over the videos circulating on social media,” Meehan said, adding: “While the use of force is never the intended outcome, our police department’s first priority is to protect and serve.”

State Sen. Mary Beth Carozza (R-Worcester) said in a statement that she had watched the Ocean City Police Department’s entire video of the arrests and emphasized that the individuals detained “were informed of the smoking and vaping prohibition on the Boardwalk, and their follow up violent actions led to their arrest.”

She said she took part in a 7½-hour ride-along with the police department the night after the boardwalk incident and witnessed various violations and arrests.

“In ALL of these incidents, I personally observed the OCPD officers and public safety aides handled themselves with professionalism as they worked to diffuse and resolve the situation at hand,” she said.

On Saturday, authorities said they were patrolling the boardwalk on foot when they noticed a group of teenagers vaping, according to a news release. The officers informed the group that vaping on the boardwalk was prohibited under a local ordinance, except in designated areas. As the group walked away, officers noticed one of the teenagers starting to vape again, officials said.

Police said the man, 19-year-old Brian Everett Anderson, did not provide identification and became “disorderly.” When they moved to arrest him, Anderson resisted, the authorities allege.

Khalil Dwayne Warren, 19, was later arrested for standing on private property next to two “no trespassing signs,” officials said. He then became “disorderly” when told to move, officials claim.

Video of the scene shows police repeatedly using force during the arrests. As a crowd recorded the encounters, multiple police officers pushed one of the men against the wall after he grabbed an officer’s bicycle. Soon after, another teenager pushed one of the officers, prompting an officer to knee him and a third to hit him with a Taser.

In the second video, a single young man faced several officers with his hands raised on an emptier-looking stretch of boardwalk. After he lowered one of his hands toward a backpack, police hit him in the stomach with a Taser and he fell to the ground.

“He was standing there!” one witness can be heard yelling in the video. Another said, “You all did that for no reason.”

The man’s mother identified him as 18-year-old Taizier Griffin. She said the video shows her son being hit with a Taser on the evening of June 6 while he was in Ocean City with a group of friends for Senior Week. She said witnesses told her he was walking on the boardwalk with a tobacco vape when police stopped him and said he wasn’t allowed to vape there. Griffin put the vape in his pocket and began to walk away, his mother told The Post. Witnesses told her an officer then grabbed for the teen’s arm multiple times and Griffin pulled away before he, as the footage shows, raises his hands.

“They end up slamming him back on the ground and hogtying him at his feet,” said Griffin’s mother, who spoke on the condition of anonymity because of privacy concerns. “I’ve never seen police do that.” She said her son was arrested and is facing charges, including second-degree assault.

Her son, she said, was “extremely scared” after the incident. “He’s young. That kind of thing would scare anybody.”

The four teens arrested on Saturday, all of whom are from Harrisburg, Pa., were charged with counts including disorderly conduct, resisting arrest and second-degree assault. They were released after appearing in Maryland District Court.

The videos left many people incredulous of the city’s explanation for why force was warranted.

“Black and brown children should not be tased while their hands are up,” Maryland House Speaker Adrienne A. Jones (D-Baltimore County) wrote on Twitter, urging Ocean City officials to review the incident. “Officers should not kneel on the back of a minor. Vaping should not yield a hog tie.”

Ovetta Wiggins contributed to this report.

Curate RegWatch
(Published Sep 28) In a test of cannabis vape cartridges conducted by NBC News, 15 out of 15 illegal carts contained...