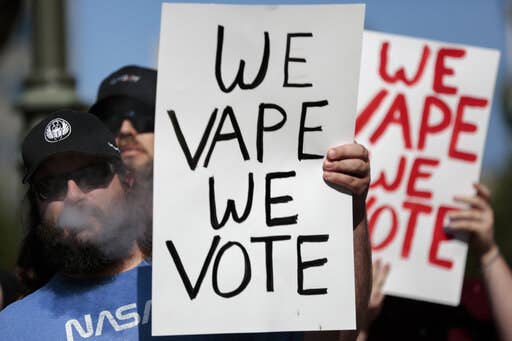 Ironically, foes of vaping fans have their own suspicions of fakery. There was a blowup in July 2018 over some 500,000 anti-vaping comments submitted to the public comment section of a proposed FDA “Regulation of Flavors in Tobacco Products” that the pro-vaping website RegulatorWatch decried as “spam,” or fake comments meant to overwhelm the 22,000 pro-vaping comments submitted to the docket.

As President Donald Trump and Congress weigh e-cigarette bans amid an outbreak of deadly lung injuries, a fight has erupted over whether vaping supporters online are real people — or bots funded by an industry under attack.

The fight was sparked by a controversial report released two weeks ago by the Public Good Projects, a public health nonprofit. Its analysis — which looked at 1,288,378 tweets related to e-cigarettes or tobacco sent between Feb. 1 and June 1 — concluded that nearly 80% were likely generated by bots, or automated accounts, “posing as passionate pro-vaping individuals.” The findings have been called into question by experts skeptical about its methodology.

The bots report sparked panic among public health officials who are suspicious that the vaping industry, backed by Big Tobacco, is using shady marketing tactics to sway public opinion with misinformation about the dangers of nicotine. But it has also triggered furious backlash online from e-cigarette users concerned about losing access to potentially life-saving vapes. This group has flooded the #NotABot hashtag with conspiracy theories and political threats aimed at the Trump administration, which is grappling with a proposed ban on flavored e-cigs.

Regulator Watch
The following is the original health alert issued by the CDC on August 30th, 2019 distributed via the CDC Health Action...