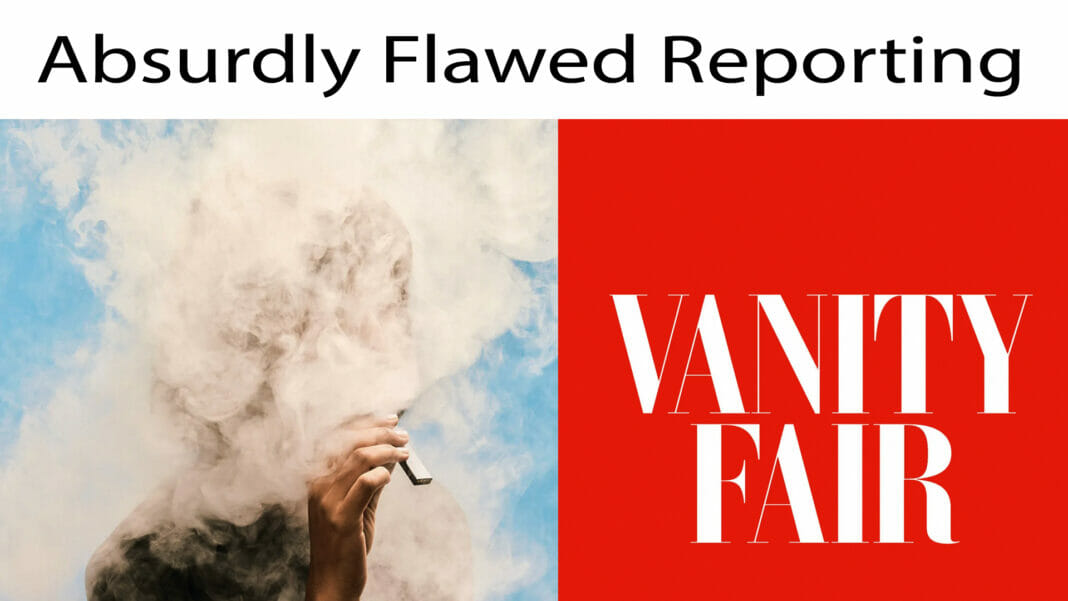 An article published December 16th in Vanity Fair by reporter Vanessa Grigoriadis has to rank as one of the sloppiest and most error-riddled pieces we have ever encountered in a mainstream publication.

Nearly every paragraph contains a factual mistake, false assumption, or an obvious omission.

Sadly, the piece does serve as a good example of the lazy, rumor- and misinformation-fueled discussion about vaping policy that so often characterizes mainstream journalism on the subject.

We would encourage our members and followers to zero in on flaws that they can spot but here are some of the more glaring examples that we compiled right off the bat.

“For more than a decade, the FDA has punted the decision about whether e-cigarettes are a public health boon, leaving Americans to decide for themselves if vapes are a godsend with the potential to save the lives of millions of smokers—or the worst newfangled tech product to come along since the Zune (with the unfortunate side effect of potentially killing you).”

This is profoundly mistaken in several ways.  First, the FDA only first declared its authority to regulate vaping products in 2016, with what’s called a “Deeming Rule.” That’s six years ago, not “more than a decade.” What’s more, they didn’t “punt” on any decision.  FDA immediately insisted that vaping manufacturers submit a complex and costly application for FDA approval – or face being wiped out of the market.

Curate RegWatch
Trust might not be a word commonly associated with one of the most controversial companies in America. Still, it’s a word...