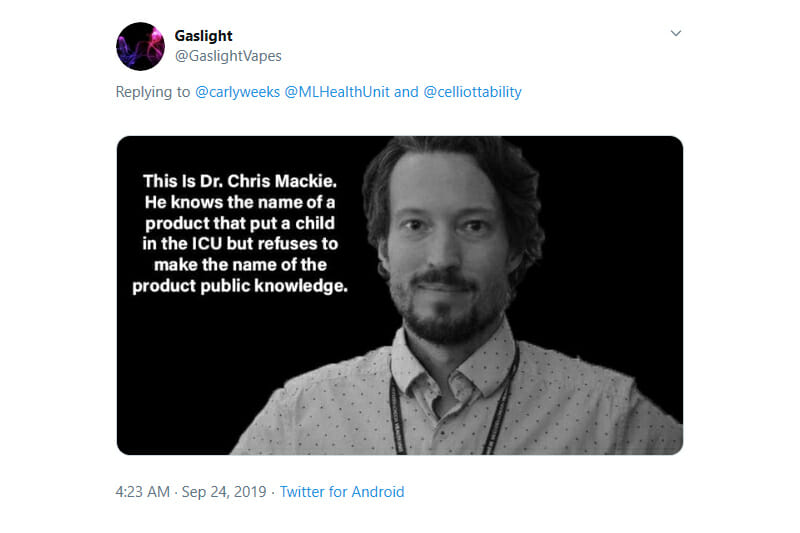 On Sept. 18, a regional medical center in London, Ontario held a news conference to report that a 17-year-old patient had nearly died from a lung condition the doctors believed was caused by vaping.

Middlesex-London Health Unit medical officer Dr. Chris Mackie told the assembled reporters that he knew which products the patient had used, but “We’re not releasing information about the brand information because that would imply that this is something coming from one brand, when clearly looking at the international evidence, that’s not the case.”

The U.S. news media at that point were already pressing the CDC to admit that the outbreak of vaping-related lung injuries was primarily (if not completely) caused by black market THC cartridges. But Mackie wouldn’t discuss what the teen had vaped during the news conference. Two days later he denied that the young person had vaped THC products at all, and laid the blame squarely on nicotine vaping.

“This person was not using [THC] products,” Mackie told the CBC. “The person was vaping fairly heavily with a nicotine-based product.”

Curate RegWatch
Today, the U.S. Food and Drug Administration issued a proposed rule to require new health warnings on cigarette packages and in advertisements to...

Juul Is Fighting to Keep Its E-Cigarettes on the U.S. Market

Catastrophic End To The Sweet Life