Stop using the worst-case scenario for climate warming as the most likely outcome — more-realistic baselines make for better policy.

More than a decade ago, climate scientists and energy modellers made a choice about how to describe the effects of emissions on Earth’s future climate. That choice has had unintended consequences which today are hotly debated. With the Sixth Assessment Report (AR6) from the Intergovernmental Panel on Climate Change (IPCC) moving into its final stages in 2020, there is now a rare opportunity to reboot.

In the lead-up to the 2014 IPCC Fifth Assessment Report (AR5), researchers developed four scenarios for what might happen to greenhouse-gas emissions and climate warming by 2100. They gave these scenarios a catchy title: Representative Concentration Pathways (RCPs)1. One describes a world in which global warming is kept well below 2 °C relative to pre-industrial temperatures (as nations later pledged to do under the Paris climate agreement in 2015); it is called RCP2.6. Another paints a dystopian future that is fossil-fuel intensive and excludes any climate mitigation policies, leading to nearly 5 °C of warming by the end of the century2,3. That one is named RCP8.5.

RCP8.5 was intended to explore an unlikely high-risk future2. But it has been widely used by some experts, policymakers and the media as something else entirely: as a likely ‘business as usual’ outcome. A sizeable portion of the literature on climate impacts refers to RCP8.5 as business as usual, implying that it is probable in the absence of stringent climate mitigation. The media then often amplifies this message, sometimes without communicating the nuances. This results in further confusion regarding probable emissions outcomes, because many climate researchers are not familiar with the details of these scenarios in the energy-modelling literature.

This is particularly problematic when the worst-case scenario is contrasted with the most optimistic one, especially in high-profile scholarly work. This includes studies by the IPCC, such as AR5 and last year’s special report on the impact of climate change on the ocean and cryosphere4. The focus becomes the extremes, rather than the multitude of more likely pathways in between.

Happily — and that’s a word we climatologists rarely get to use — the world imagined in RCP8.5 is one that, in our view, becomes increasingly implausible with every passing year5. Emission pathways to get to RCP8.5 generally require an unprecedented fivefold increase in coal use by the end of the century, an amount larger than some estimates of recoverable coal reserves6. It is thought that global coal use peaked in 2013, and although increases are still possible, many energy forecasts expect it to flatline over the next few decades7. Furthermore, the falling cost of clean energy sources is a trend that is unlikely to reverse, even in the absence of new climate policies7.

Assessment of current policies suggests that the world is on course for around 3 °C of warming above pre-industrial levels by the end of the century — still a catastrophic outcome, but a long way from 5 °C7,8. We cannot settle for 3 °C; nor should we dismiss progress. 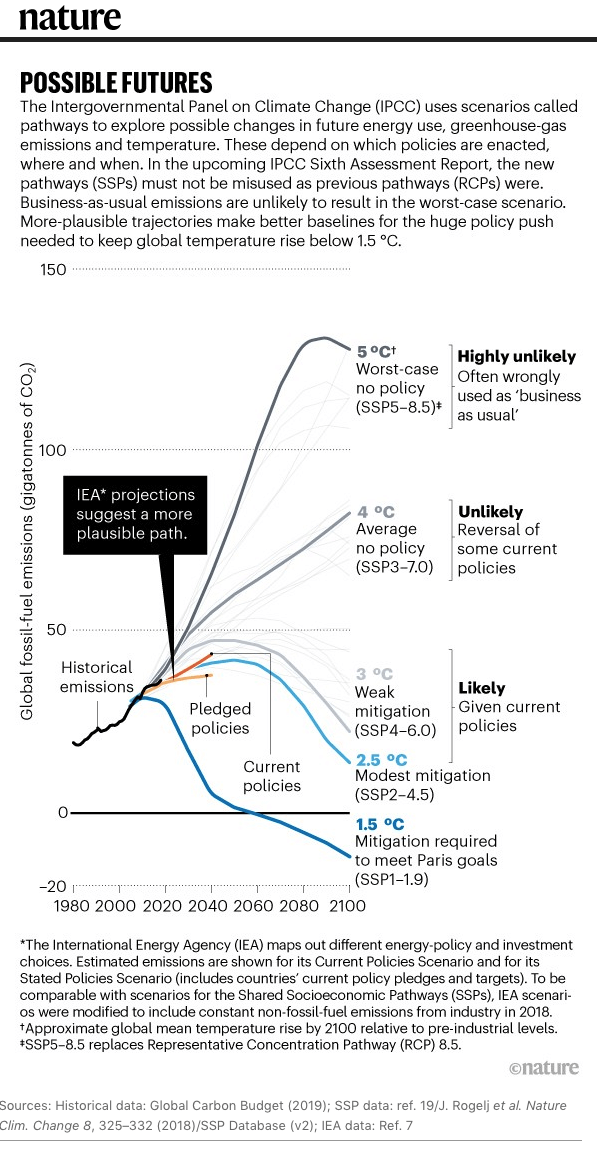 Previous article
Pandemic or not, Canada still faces a climate crisis — and the clock is ticking
Next article
Europe Plans to Say Nuclear Power and Natural Gas Are Green Investments