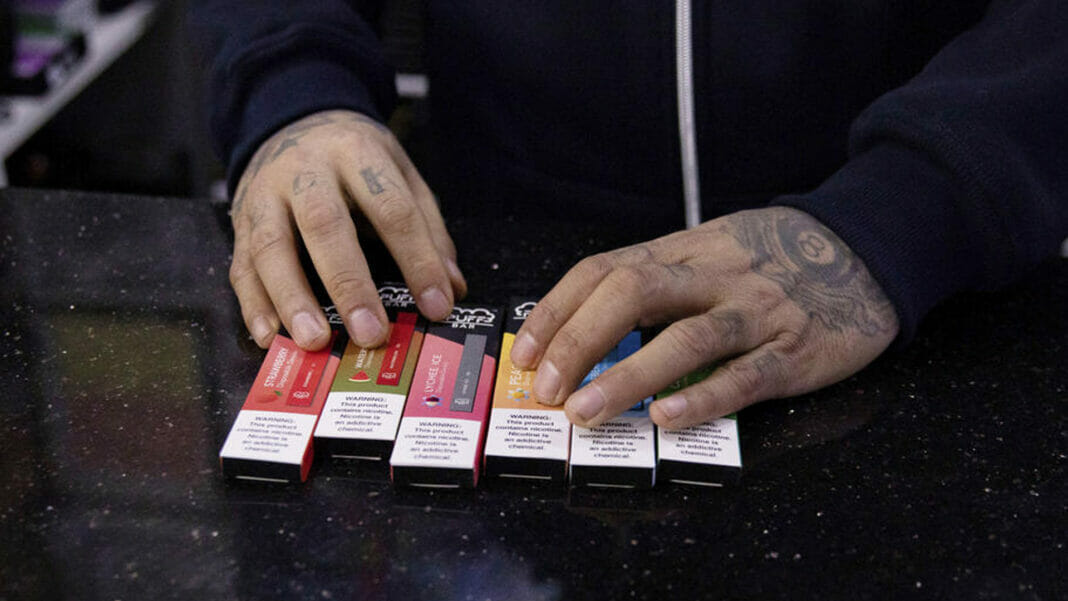 According to the Food and Drug Administration, it’s been going up since 2019 and roughly 80% of young people who vape choose flavored disposable vapes. GPB’s Ellen Eldridge reports.

Youth nicotine addiction is continuing to rise despite actions by the Food and Drug Administration to limit the appeal of tobacco and e-cigarette products available to children, according to the 2020 National Youth Tobacco Survey.

The majority of young people who vape choose flavored disposable vapes, Dr. Janet Woodcock, the acting commissioner of the FDA, testified Wednesday before a House subcommittee.

“Menthol has additional properties in pharmacologic properties that I believe potentiate the effects of nicotine addiction and make it harder to stop either vaping or smoking,” Woodcock said. “And so it’s, to my mind, like actually having a higher concentration of nicotine in whatever delivery system.“

That means banning all flavored e-cigarette products, including traditional menthol cigarettes, may be the best method to curb youth addition to nicotine, committee members said.

Rep. Raja Krishnamoorthi, chairman of the Oversight Subcommittee on Economic and Consumer Policy, hosted the fourth of such hearings to examine the youth vaping epidemic in the United States and the role of the federal government in addressing it.

Georgia’s high school vaping rate was 17%, according to 2019 data from the Centers for Disease Control and Prevention, which was lower than the national average at the time.

Georgia legislators also raised the age to buy tobacco products to 21 and imposed a 7% excise tax on all vaping products for the first time.

But national data show that disposable e-cigarette use increased 1,000% among high school users and approximately 400% among middle school students currently using e-cigarettes, according to a CDC report.

“I think this switch to a different alternative method of flavored cigarette, rather than staying with the same tobacco-flavored Juul, is another piece of evidence that the youth really prefers the flavors,” Woodcock said, referencing American electronic cigarette company Juul.

In 2018, Georgia ranked 47th in the nation for funding programs to prevent children from using tobacco, according to a report that looked at what states did with money from the 1998 tobacco settlement. The state continues to have one of the nation’s lowest taxes on tobacco products at just 3 cents per cigarette pack, and that money isn’t going toward prevention.

While the CDC recommended in 2018 Georgia spend $106 million per year to prevent tobacco use among teenagers and to help adults stop smoking, the state only used about 1% of that, John Schachter with the Campaign for Tobacco Free Kids said.

Schnacter noted at the time that 11,700 Georgians die each year of tobacco-related causes and that tobacco use costs the state more than $3.1 billion in health care expenses.

“So, again, if the state is not spending much on tobacco prevention, we’re only going to see these numbers go up because the industry is still so aggressive,” Schachter said. “Both the cigarette industry and the tobacco industry in general, and (these companies are) marketing their products especially toward kids.”

The FDA is now deciding whether any e-cigarettes or flavors should remain legal.

All e-cigarette manufacturers were required to submit Premarket Tobacco Product Applications to FDA by Sept. 9, 2020, in order to stay on the market.

While the FDA has until Sept. 9 to make a decision, Krishnamoorthi said he hopes to see a wide ban of products exacerbating the youth vaping epidemic.

“I am more optimistic than ever that Commissioner Woodcock will do the right thing and deny the PMTA applications for all flavored vaping products, and all high-nicotine vaping products,” he said.

Curate RegWatch
In 2018, Caleb Mintz sensed something wasn’t right about a presentation given at his school, the renowned Dwight School on the...