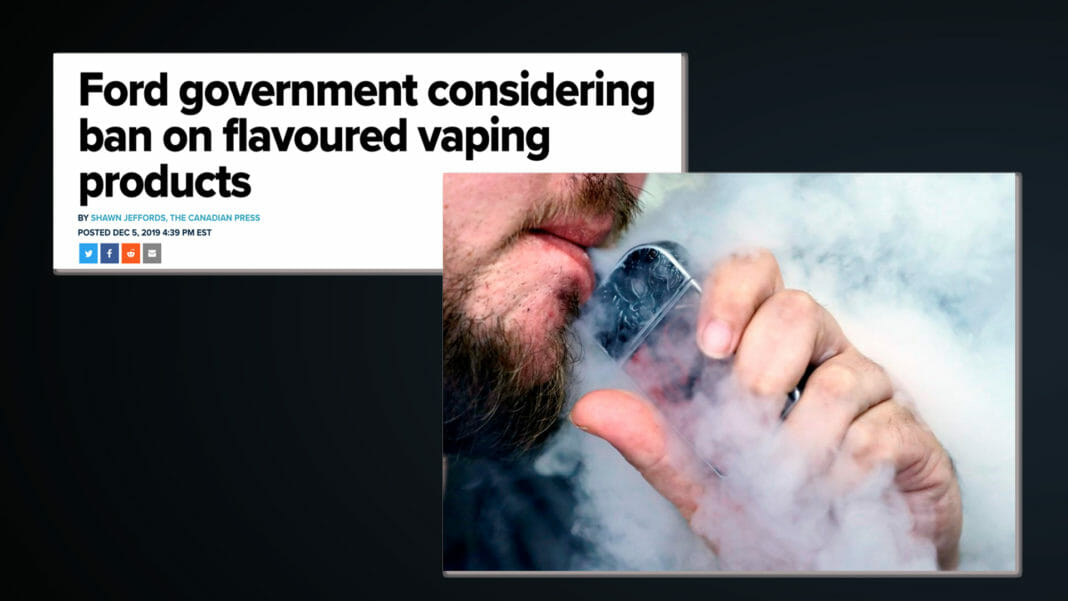 The Ontario government’s concern for young residents is prompting it to entertain the idea of banning flavoured vaping products, the province’s health minister said Thursday as another Canadian province finalized its own prohibition on the popular items.

Christine Elliott said Ontario’s Progressive Conservative government is concerned about the spike in youth vaping and is looking at a variety of measures to address it.

“We do know there is more to be done so we are taking a look at the flavoured vapes,” she said. “We are looking at the nicotine content in vapes. We are looking at where vaping products should be sold … we will be taking more steps, absolutely.”

The minister’s statement came the same day Nova Scotia’s health minister announced that province will be the first to ban sales of flavoured e-cigarettes and juices starting April 1, 2020.

Randy Delorey said the move is aimed at promoting a smoke-free culture in a province where vaping rates have been growing, especially among young people.

Elliott said her advice to young people is to not start vaping, adding that some of the products _ featuring enticing flavours such as cotton candy and peach juice_ appear to be targeted to a young audience.

“We don’t know the long-term health effects of them,” she said of the products. “We are studying them now, but it’s not a benign substance. It’s not peach juice. You need to be very concerned about using these products.”

Vaping proponents say it is a safer alternative to smoking and can help people quit that habit.

Ontario said last month it would ban the promotion of vaping products in convenience stores and gas stations, a measure that will come into effect next month.

The province’s previous Liberal government was set to implement similar measures that would have kicked in last July, but the Progressive Conservatives paused those regulations shortly after taking office.

Health authorities in Canada have begun to closely monitor reports of respiratory illnesses potentially linked to vaping. In the U.S., health officials have reported 1,604 cases of vaping-related illnesses, including 34 deaths.

No single ingredient, electronic cigarette or vaping device has been linked to all the illnesses in the U.S., but most who got sick said they vaped products containing THC, the active ingredient in marijuana.

“Given the number of teens vaping now that’s becoming a huge issue and we need to stop that,” he said.

Bloomberg’s Philanthro-Colonialism | A Threat to Global Health and Science