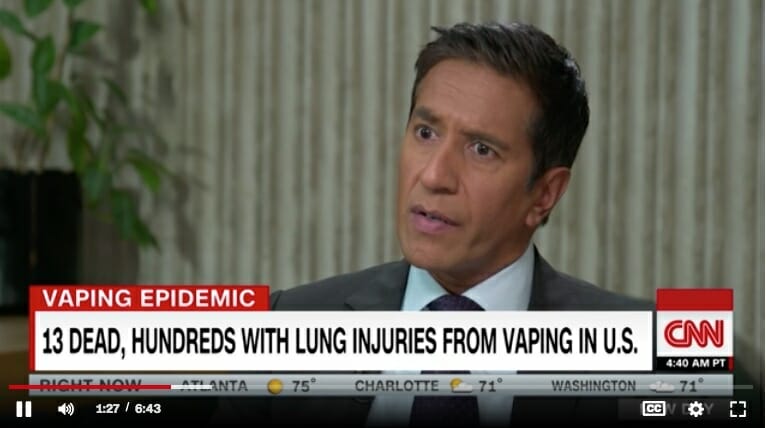 A state investigation into vaping-related lung injury cases in Massachusetts has found that vape products used in six probable cases were purchased legally from dispensaries. All of the products contained THC or tetrahydrocannabinol, the primary psychoactive component of cannabis.

None of the confirmed cases in the investigation involved products purchased from dispensaries.

Details from this investigation into vape products were released on Thursday and included 49 vaping-related lung injury cases total, 16 of which were “confirmed” and 33 of which were “probable.”

The Massachusetts Cannabis Control Commission said in an email Friday that it is reviewing the information and will use it for the commission’s ongoing investigation into whether marijuana products manufactured by licensees in Massachusetts contain substances of concern.

“Public health and safety remain paramount to the Commission,” the statement said. “The agency continues to test samples from licensed Medical Marijuana Treatment Centers and Marijuana Establishments to understand whether legal products contain vitamin E acetate or other contaminants of concern while its quarantine on marijuana vaping products, except medical-use flower vaporizers, remains in place.”

There have been 2,291 cases of lung injury in the United States linked to vaping as of December 4, according to the US Centers for Disease Control and Prevention. Vaping-related lung injuries have been reported in all 50 states, the District of Columbia, Puerto Rico and the US Virgin Islands.

In tracking these cases, the CDC has decided to include only cases that resulted in hospitalization. As a result, CDC removed 175 non-hospitalized cases from its previously reported national case counts. The last report, released on November 21, had recorded 2,290 cases of lung injury linked to vaping.

The CDC on Thursday also reported 48 confirmed deaths in 25 states and the District of Columbia.

While it appears that vitamin E acetate, a thickener used in some vaping products, is linked to the lung injury cases, the agency said it can’t rule out other chemicals.

“CDC recommends that people should not use THC-containing e-cigarette, or vaping, products, particularly from informal sources like friends, family, or in-person or online dealers,” the agency said. “In addition, people should not add any substances to e-cigarette or vaping products that are not intended by the manufacturer, including products purchased through retail establishments.”

Fake News | Do Mixed Messages On Vaping Put Lives At...