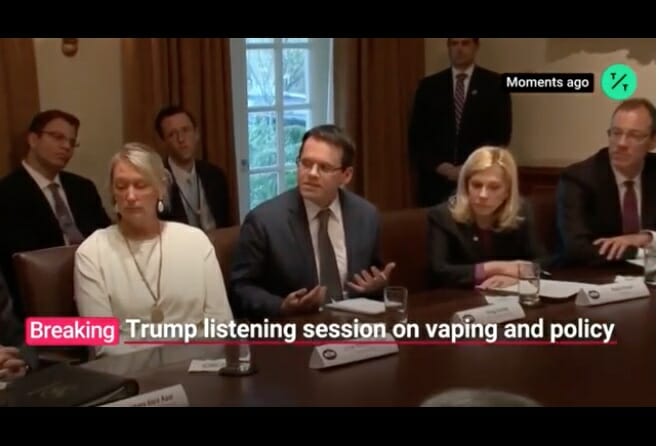 In a White House listening session that at times turned into a free-for-all shouting match, President Trump tried to get answers on the role of flavors in the adolescent “vaping epidemic,” and how to best regulate vaping products. And the attendees representing vapers and small vaping businesses gave as good as they got—or even better.

Part of the meeting was unexpectedly televised, allowing the whole country to hear Campaign for Tobacco-Free Kids president Matthew Myers lie to the President’s face about tobacco being the most popular vaping flavor for adults. That wasn’t the only falsehood flung at Trump by anti-vaping activists.

Meredith Berkman of Parents Against Vaping e-cigarettes (PAVe) insisted that there are millions of teenagers “addicted” to nicotine because of vaping, and that nothing short of banning all flavors would solve the problem. Myers agreed, as did the leaders of the American Cancer Society Cancer Action Network, American Lung Association and the American Academy of Pediatrics. (The lung association actually supports a total ban.)

Utah Sen. Mitt Romney and Trump aide Kellyanne Conway sat next to each other and smirked every time one of the vaping advocates made a claim. Romney at one point said, “Utah is a Mormon state, and half the kids in high school are vaping.”

FDA Will Ban Menthol Cigs: Will There Be Flavored Vapes to...

Curate RegWatch
The FDA Center for Tobacco Products will begin the process of banning menthol cigarettes and flavored cigars—more than a decade after...

Blaming Breathing Problems on ‘Vaping’ Is Like Blaming Food Poisoning on...

Menthol Cigarettes Kill Many Black People. A Ban May Finally Be...