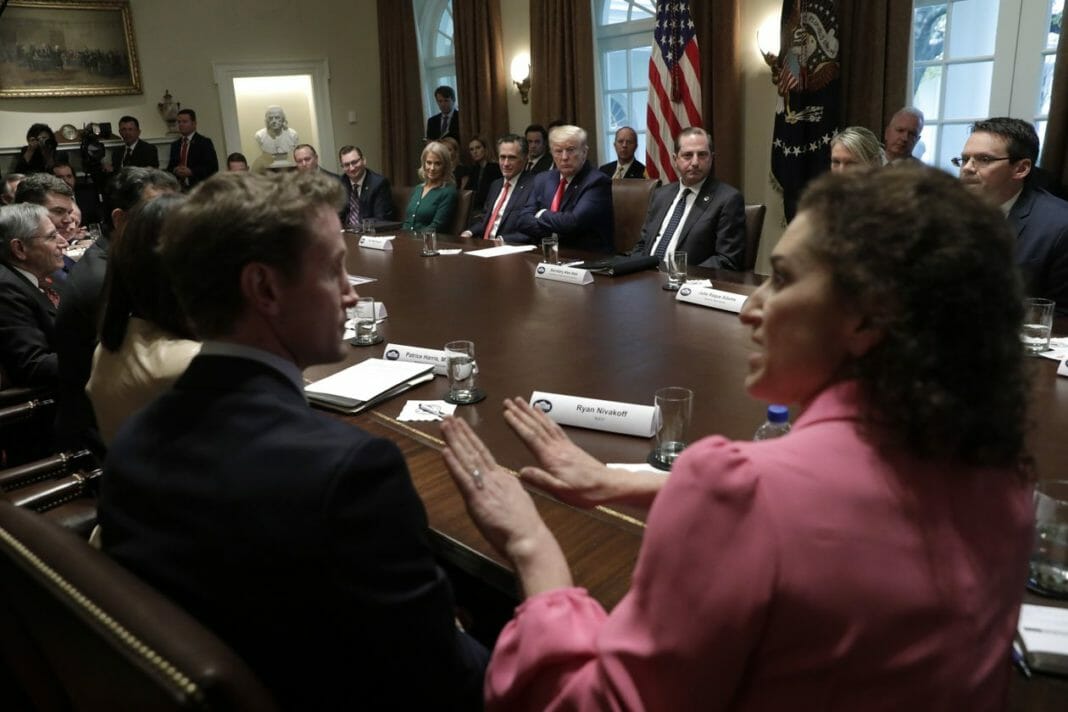 White House support for a ban on sweet and fruity e-cigarettes appeared to be softening, as President Trump said the market prohibition could have dangerous consequences.

“If you don’t give it to them, it is going to come here illegally,” he said in a meeting Friday with vaping industry leaders, public-health advocates and others on policies to address a surge in underage vaping.

Mr. Trump said that instead of legitimate companies “making something that’s safe, they are going to be selling stuff on a street corner that could be horrible. That’s the one problem I can’t seem to forget.”

Mr. Trump in September announced a plan to curb underage vaping by barring all e-cigarettes except those that taste like tobacco. The administration had been expected to release details on the ban earlier this month, but it was delayed following pushback from conservative interest groups, vaping industry advocates and e-cigarette users.

Juul represents 64% of the market and is blamed for the rise in teen vaping. The company has voluntarily pulled its sweet, fruity and mint-flavored refill pods from the U.S. market. Government data show that those types of flavors are popular among young people and U.S. health officials say they have driven the uptick in underage vaping.

When Mr. Trump on Friday asked about Juul’s voluntary sales restrictions, Juul Chief Executive K.C. Crosthwaite said flavors can help adult cigarette smokers switch to a less harmful alternative for their nicotine fix. He added that the company would defer to the science-based approach of the Food and Drug Administration to determine which products ultimately should remain on the market.

Juul and other e-cigarette manufacturers face a May deadline to submit for FDA review any products they want to sell in the U.S. after that point.

“Preserving an option for adult smokers who can’t quit is really important work. That’s the mission of our company,” Mr. Crosthwaite said. “This youth issue, we felt, and we were a part of it, we had to address it as the leader. We took the tough steps to change our portfolio.”

NJOY Inc. and Reynolds American Inc., makers of the No. 2 and No. 3 e-cigarette brands, argued at Friday’s meeting that flavors weren’t the cause of the problem. “We believe you can market flavors responsibly, Mr. President,” Joseph Fragnito, a Reynolds executive, said.

Vaping industry representatives put forward alternatives to an outright ban, such as advertising limits, an end to online sales, requiring e-cigarettes to be kept behind the counter or restricting their sale to adult-only stores.

At the White House meeting, Juul rivals said the company voluntarily pulled most of its flavored products because it could sit out and wait for FDA authorization as smaller companies went out of business, then could come back with even more market share. “Sounds like Rockefeller,” Mr. Trump said. Mr. Crosthwaite said Juul halted the sale of those products to address the problem of youth use.

Juul currently sells only menthol- and tobacco-flavored refill pods in the U.S.

“Flavors can play a role for adults to make a transition,” Mr. Crosthwaite said. “The issue is kids get access to it.”

The president asked about the impact a flavor ban might have on vaping manufacturers and retailers and inquired about a state-based approach to vaping regulation. Anti-tobacco advocates pleaded with him to stick to his backing of a flavor ban, saying straight-A students were failing out of school because of their nicotine addictions.

That position was supported by Sen. Mitt Romney (R., Utah), who said at the meeting that flavors were drawing in young people. He also credited Juul’s actions. “Putting out cotton-candy flavor and what is it, unicorn poop flavor?” Mr. Romney said, referring to products made by other vaping companies. “Look, this is kid product. We have to put the kids first.”

Nearly 28% of high-school students surveyed this year reported vaping at least once in the past 30 days, up from 21% last year, according to a recent federal government study.

Since Mr. Trump announced the planned ban on e-cigarette flavors, conservative interest groups and vaping industry advocates have lobbied against it, arguing that it would put independent vape shops out of business and could fuel a black market. They sought to raise a political point with Mr. Trump, too, saying vaping is popular in key states he needs to win re-election. Some public-health advocates argued that it could have the unintended consequence of pushing adult e-cigarette users back to deadly cigarettes.

U.S. health officials have been confronting a sprawling black market for vaping products as they seek to combat the surge in teen use of e-cigarettes and more recently a mysterious lung illness that has caused more than 40 deaths across the country. According to the Centers for Disease Control and Prevention, most of the lung illnesses have been linked to black-market vaping products containing THC, the psychoactive compound in marijuana.

Curate RegWatch
Two hospitals in the Midlands have become the first in Britain to open shops selling e-cigarettes to patients and visitors as...

How smoking, vaping and drug use might increase risks from Covid-19