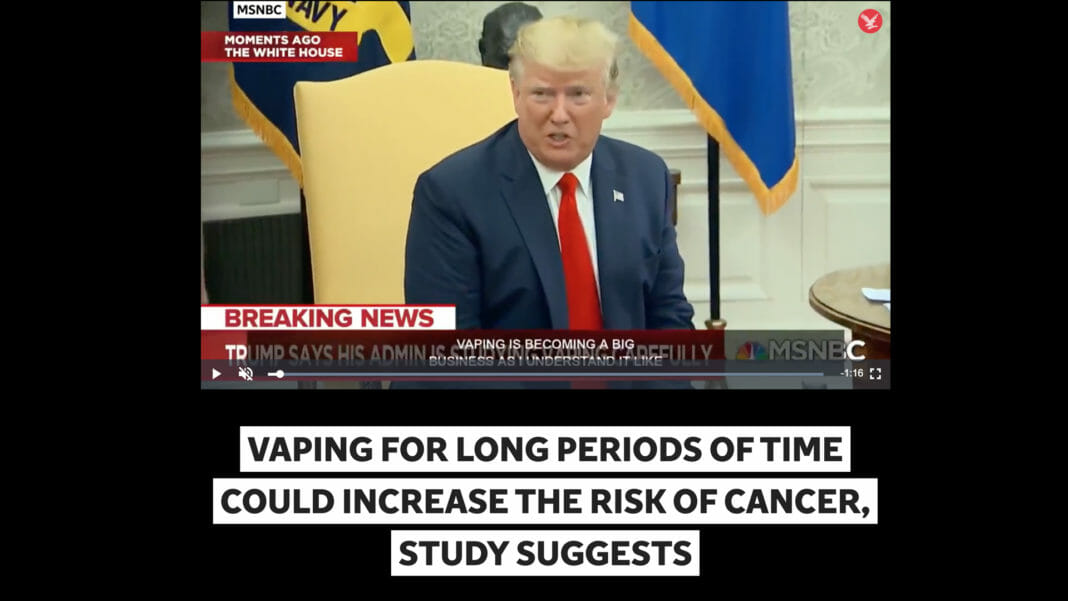 Illnesses and deaths linked to vaping continue to increase

New research on a small cohort of mice has suggested that long-term exposure to vaping liquids that contain nicotine could increase the risk of cancer.

In a bid to find out whether or not vaping really is a safer alternative to smoking, scientists from New York University (NYU) conducted a study on 40 mice in which the animals were exposed to e-cigarette vapour for a year.

Study leader Moon-Shong Tang and his team of researchers exposed the mice to an aerosol of nicotine dissolved in isopropylene glycol and vegetable glycerin, a common vehicle for vaping liquids.

After breathing in the vapour for 20 hours a week, the results showed that 22.5 per cent of the group of mice exposed to nicotine had developed cancerous tumours in the lining of the lungs, and 57.5 per cent had developed growths in their bladder tissue that can be precursors to cancer.

Meanwhile, the group of mice exposed to vapour that did not contain nicotine developed no lung tumours, while 6.3 per cent had precancerous bladder growths.

In addition, only 5.6 per cent of mice in the control group that breathed only filtered air wound up with lung tumours, and none of them had growths in their bladders.

Five mice in the group exposed to nicotine died over the course of the year. So did two of the mice in each of the other groups.

The team at NYU stress that further research is needed to know whether vaping leads to cancer in humans.

However, they hope their findings, published in the journal Proceedings of the National Academy of Sciences, will encourage people to think twice before trying e-cigarettes, which are widely perceived to be a safer alternative to smoking.

“We needed credible evidence to guide people in their choices, and it is unambiguous that nicotine alone will cause damage to the cells that make up organs, including lungs,” said Tang.

“Now, we can try to find measures to prevent incidents of e-cigarettes causing cancer.”

Illnesses and deaths linked to vaping have continued to increase around the United States, with health officials claiming there have now been 1,080 cases and 19 deaths.

In response to the outbreak of illnesses several states have ordered bans on flavoured e-cigarettes.

Last month, US president Donald Trump announced that he is considering a ban on all flavoured e-cigarettes, declaring that companies are getting rich while people die.

During an appearance at the Oval Office, the president said that parents needed to be taught about what was happening.

“People are going to watch what we’re saying and parents are going to be a lot tougher with respect to their children,” Trump said.

“They’ve become very rich companies very fast and the whole thing with vaping is it’s very profitable. And I want companies – you know that … that’s why I’m fighting with China. But we can’t allow people to get sick.”

He added: “And we can’t have our kids be so affected. And I’m hearing it.”

A recent study of more than 12,000 16 to 19-year-olds found that vaping adverts were making e-cigarettes “more appealing” to teenagers.

While 40 per cent of participants said they spotted adverts on websites and in social media posts from celebrities, 38 per cent admitted the promotion made vaping products seem “appealing”.

Dr Sara Hitchman, lecturer in addictions at King’s, said: “Our study suggests that additional efforts are needed to limit the appeal of vaping product ads to youth.”

What We Know About Vaping-Related Lung Illness