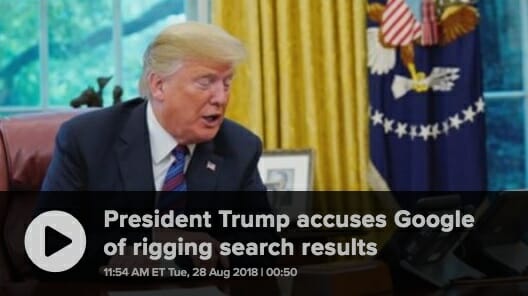 President Donald Trump doubled down on threats against Facebook, Twitter and Google Tuesday afternoon, saying the social platforms are “treading on very, very troubled territory and they have to be careful.”

“Google has really taken advantage of a lot of people and I think that’s a very serious thing and it’s a very serious charge,” Trump told reporters after a meeting with the president of FIFA. “They better be careful because they can’t do that to people.”

A Twitter spokesperson, when asked to respond to Trump’s comments, pointed to previous statements and congressional testimony denying any form of conservative bias on the platform. A spokesperson for Facebook did not immediately return request for comment.

Trump earlier Tuesday accused Google of altering search results to prioritize negative coverage and left-leaning outlets and warned that the issue “will be addressed.”

Facebook to Buy Startup for Controlling Computers With Your Mind