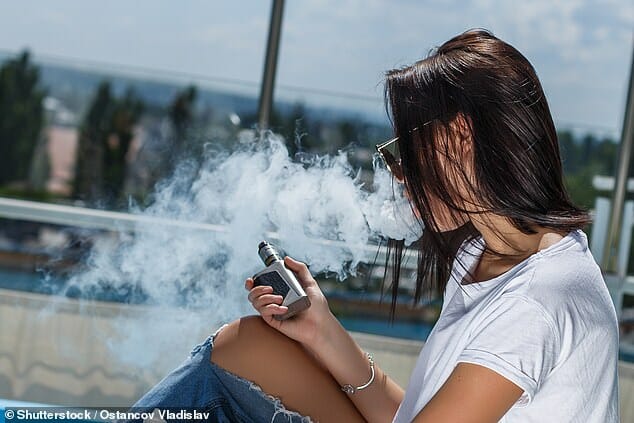 In another hammer blow to the vaping industry, scientists from a group of American universities, including Yale, Johns Hopkins and Princeton, found exposure to e-cigarette vapour creates a ‘tumour-promoting environment’ in the breast and elsewhere in the body.

Professor Kefah Mokbel, a surgeon at the London Breast Institute at the Princess Grace Hospital, said the findings should be a wake-up call to those who think the devices are harmless.

‘This study provides a good level of evidence that vaping has the potential to induce breast cancer and promote its progression and spread to the lungs,’ he said.

He added that it was a ‘misconception’ that e-cigarettes are safe and believes vaping could prompt the development of other types of cancer.

The US team carried out tests on female mice, some kept in fresh air, others exposed to e-cigarette vapour. After a fortnight, all were injected with breast cancer. At the end of six weeks, tumours had grown almost twice as fast in the mice exposed to the vapour.

The mice who inhaled e-cigarette vapour were also more likely to develop pulmonary metastasis – secondary malignant tumours in the lung, which is often fatal when it occurs in humans.

Writing in the journal Cancer Letters, the team noted that ‘young women represent a target of e-cigarette companies’ and the results came in the context of ‘the increasing popularity of vaping, especially in teenagers’.

Professor Charles Coombes, of the Cancer Research UK Imperial Centre, cautioned that the study involved a small number of animals. ‘The results are suggestive but not conclusive,’ he said.

News of the findings comes days after scientists on the UK Government’s Committee on Toxicity said vaping can worsen heart disease and lung disorders, but was safer than smoking tobacco.

About 3.6 million UK adults have used e-cigarettes in the past decade. The annual vaping market in Britain is worth £2.5 billion.

The manufacturers of e-cigarettes, which work by heating up a liquid that usually contains nicotine, propylene glycol and flavourings, say vaping is much less harmful than smoking tobacco.

Brent Stafford
*Get ready to think! Is there a winning argument in the War on Vaping? Why is “liberty” a failed argument? How does...