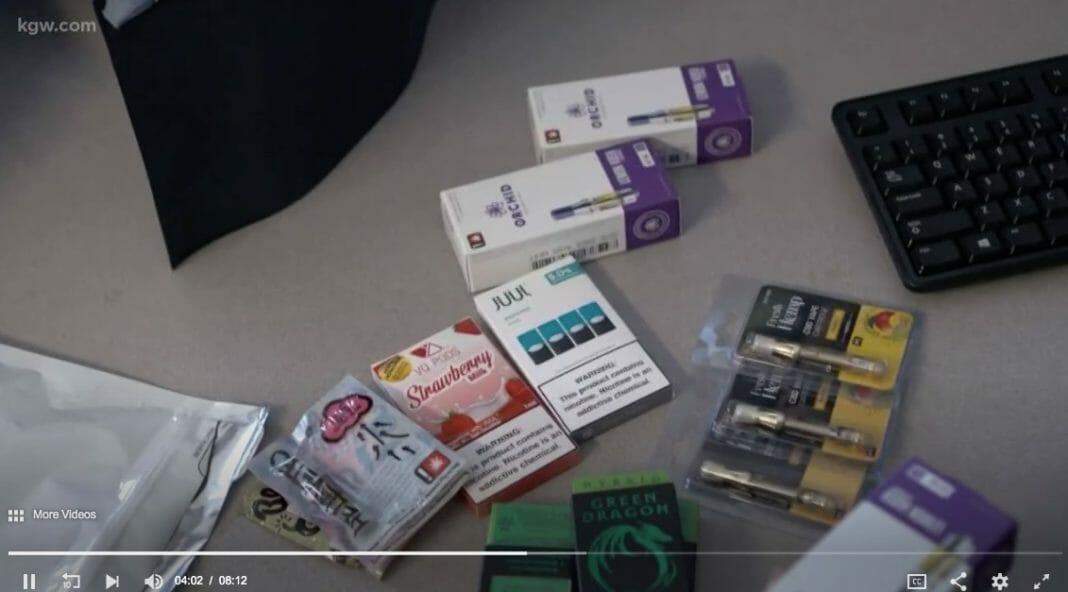 KGW News commissioned a Portland lab to test three THC cartridges, a Juul pod, a VQ pod and a CBD cartridge. Here’s what we found.

Justin Wilson was hanging out with his friends earlier this year when he suddenly stopped breathing. He splashed water on his face, and quickly realized he was turning blue.

He was hospitalized and doctors placed him into a coma, but they couldn’t figure out what was wrong with him.

His health at one point was so dire, his dad was asked to talk to the hospital’s chaplain. After he woke up, he was told he had fatty lipids in his lungs, and he was diagnosed with vaping toxicity, a severe lung disease most likely caused by vaping.

Wilson is one of more than 1,800 people nationwide who have been diagnosed with a mysterious vaping-related illness since August 2019, according to the Centers for Disease Control.

Others weren’t so lucky. Thirty-seven people have died from the illness, two of whom are from Oregon.

At this point, doctors still don’t know what exactly is to blame for the illnesses and deaths.

“I know that people who are not vaping are not getting this,” Jake Wilson, Justin’s dad, said.

We spoke to several experts and conducted our own lab tests on vaping products in hopes of getting a better understanding of what’s causing this epidemic.

Justin Wilson is just one of millions of Americans who uses e-cigarettes or vaping pens to help them quit smoking.

He started vaping with a Juul pen about a year ago, and occasionally used THC cartridges as well.

“[Vaping] was a safer alternative and I thought I could avoid the terribleness that cigarettes gave you by switching to a Juul,” he said.

According to the Food and Drug Administration, the promise of e-cigarettes as a “safe” alternative to smoking cigarettes has been heavily marketed by some vaping companies, and the multi-billion dollar industry has ballooned in size in that time, mostly thanks to lackluster regulations by the feds.

Vaping steadily gained popularity over the years, but it wasn’t until 2017 that a brand-new product on store shelves would change the face of the industry – and the face of who vapes.

Curate RegWatch
A study published in the New England Journal of Medicine Wednesday put to the test a major claim made by e-cigarette makers when...