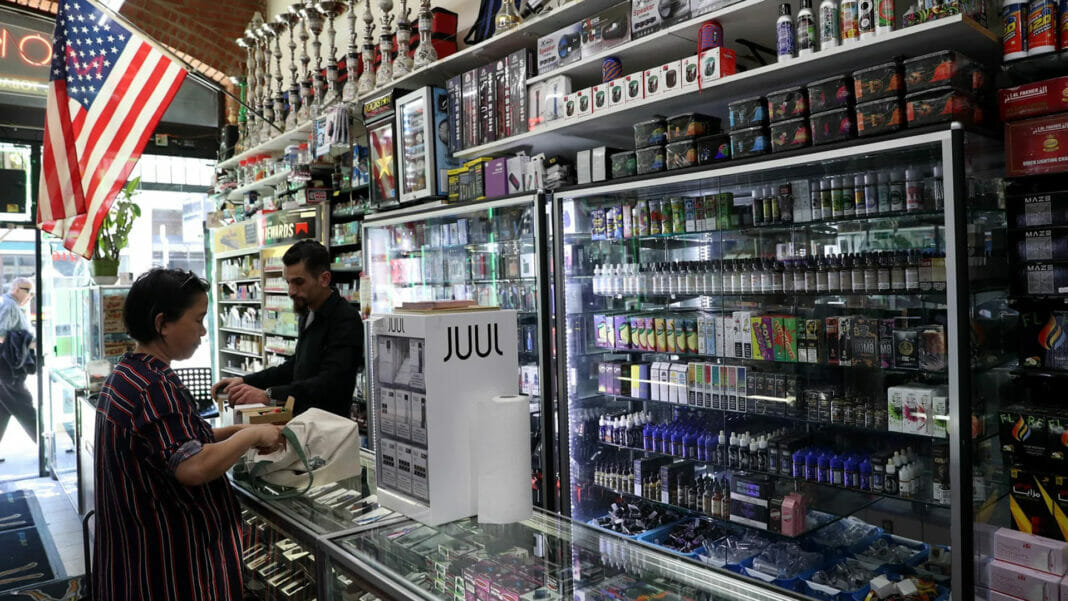 A monumental set of decisions is expected Thursday from the Food and Drug Administration that could reshape the tobacco industry for years to come by limiting, or altogether blocking, the sale of millions of electronic cigarette products.

Though the FDA has long regulated the marketing and sale of traditional tobacco products such as cigarettes, the agency had long not required the same scrutiny of vapes, allowing a market to flourish.

Now more than 6% of American adults — and 1 in 5 high school students — say they vape. The industry has ballooned to more than $6 billion in size, led by the industry giant Juul, which controls about 40% of the market.

The imminent decisions by the FDA could affect almost all of that. About 6.5 million products made by more than 500 companies are under evaluation about whether they are “appropriate for the protection of public health.”

If the agency finds that they are not, companies could be required to pull their products — including rechargeable vape pens, disposable e-cigarettes and the liquids that fill them — from the market.

“I’m guessing that the decisions over the next couple of days will result in a fundamental change in the e-cigarette market,” said Matthew L. Myers, president of the Campaign for Tobacco-Free Kids.

E-cigarette companies, including Juul, argue that their products are safer than traditional tobacco products such as cigarettes.

Though vaping allows users to avoid some of the harmful carcinogens caused by smoking traditional cigarettes, studies have found that e-cigarettes are still harmful.

Inhaling the vaporized oil introduces harmful chemicals into the lungs, including vitamin E acetate. Dozens of people have died in recent years from vaping complications in the U.S., and thousands more have been hospitalized.

Additionally, virtually all e-cigarette products contain nicotine, some in high levels — including Juul’s 5% pods, each of which contains as much nicotine as an entire pack of cigarettes. Nicotine affects prenatal and adolescent brain development, making it dangerous for both teenagers and pregnant people to vape.

“If any e-cigarette could actually help a smoker quit, they would apply to be a drug through other pathways that the FDA [has], and they would demonstrate that they are safe and effective in helping smokers quit,” said Erika Sward of the American Lung Association, which has advocated for the denial of all applications to the FDA for any flavored tobacco product.

“Instead, what we’ve seen is another generation of kids addicted and a whole situation where we have millions of smokers — who might otherwise try to end their addiction — try to use this product,” she said.

The FDA’s decisions are due, but it’s not clear yet what the agency will decide

In 2019, a federal judge ordered e-cigarette manufacturers to submit applications to the FDA by 2020. Their products would be allowed to remain on the market for one year while the agency reviewed them. That yearlong deadline is up Thursday.

The agency may not respond to every application by Thursday’s deadline. It has said it will prioritize based on market share, meaning companies such as Juul, along with British American Tobacco and Imperial Brands, which respectively own the brands Vype and blu, may face decisions as soon as Thursday.

Possibilities range from a major crackdown on virtually all vape products to a more targeted approach, perhaps blocking the sale of flavored products or disposable e-cigarettes, or creating marketing rules similar to those that govern traditional cigarettes.

“If they approve any of these, they definitely will have restrictions on both marketing and some of the product design that will be [intended] to reduce youth initiation and use,” said Kathleen Hoke, a professor of public health law at the University of Maryland.

Last month, the agency made its first set of marketing denials for some 55,000 flavored vape products from three companies, ordering them to pull their products from the market. It has also denied applications for companies marketing flavors designed to appeal to kids such as Apple Crumble and Cinnamon Toast Cereal.

Regulators said the applications from the FDA’s first set of denials “lacked sufficient evidence” that any benefit to adult smokers outweighed “the public health threat posed by the well-documented, alarming levels of youth use of such products.”

Some researchers worry that a major crackdown on Juul and other manufacturers will simply send teenagers reaching for traditional cigarettes instead.

“I think it would be a public health disaster,” said Dr. Michael Siegel, a researcher at Tufts University who studies youth tobacco and alcohol use. “Vaping is not causing a culture of smoking. It’s actually replacing that culture.”

Youth smoking rates have fallen dramatically in recent years as vaping has exploded in popularity. But other researchers are skeptical the trend would reverse.

Brent Stafford
Mountains of paperwork, clinical trials, endless frustration and most of all, heartbreak. This describes the onerous Premarket Tobacco Application process (or PMTA)...