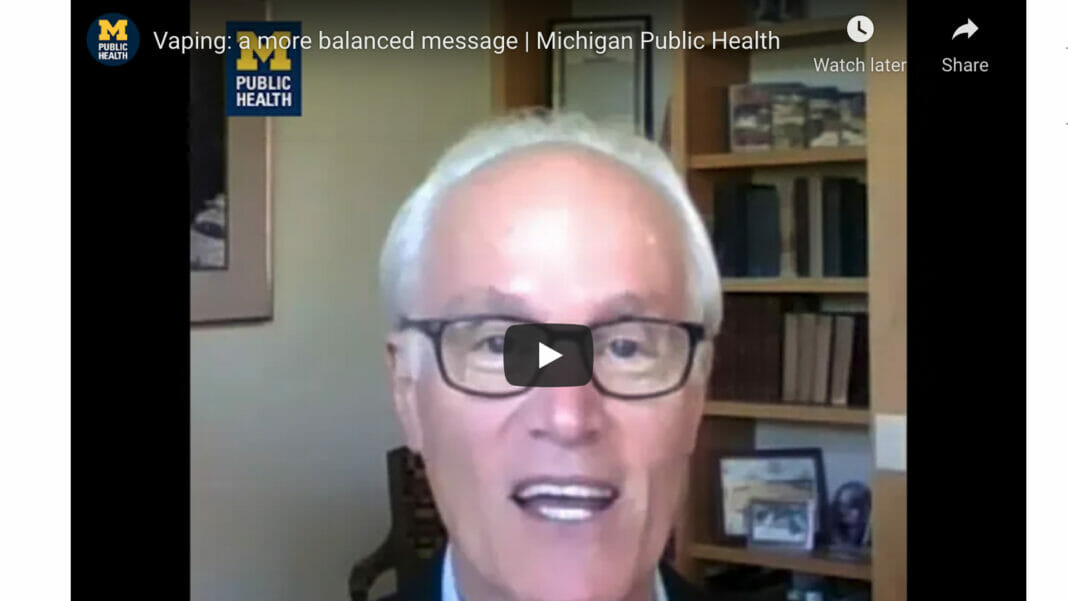 Kenneth Warner, dean emeritus and the Avedis Donabedian Distinguished University Professor Emeritus at the University of Michigan’s School of Public Health, says, however, that the potential of vaping to increase smoking cessation has been largely overshadowed by media coverage and policies that focus on the potential risk vaping represents for teens.

Warner and 14 other past presidents of the Society for Research on Nicotine and Tobacco co-authored an article that argues that the media, legislators and the general public have developed a negative view of e-cigarettes because of the heavy emphasis public health organizations have placed on protecting kids from vaping while ignoring the potentially substantial benefits of e-cigarettes in helping adults quit smoking. The article is published online in the American Journal of Public Health.

Warner discusses why the group, all of whom have presided over the top tobacco research society in the world, decided to take on this issue.

What prompted this group to write this article?

In my 45 years in the field of tobacco control research, I’ve never seen an issue that is as divisive as this one; and maybe none that is as important to public health. We have a large group within public health who are very much opposed to vaping because they see it as imposing huge risks on kids. On the other end of the spectrum, we see a number of researchers and members of the vaping community who believe that vaping is a great tool for helping people to quit smoking and that it is far less hazardous than smoking. These polar opposite views have created much of the contention within the tobacco control community.

Our goal in this paper is to try to inject some sense of balance, to get public health organizations, the media and legislators to recognize that their appropriate but singular desire to keep e-cigarettes out of the hands of kids may actually be harming public health. Policies oriented exclusively toward protecting kids may be responsible for more adults smoking than would be if we had policies that also emphasized helping adults to quit with vaping, and frankly, if we had honest characterizations of the risks of vaping.

What do you want people to take away from the AJPH article?

We call for a rebalancing of society’s consideration of vaping, and specifically for more attention being paid to its potential to increase smoking cessation. We should continue working to decrease young people’s use of e-cigarettes—of all nicotine products, for that matter—but we must increase our focus on adult smokers.

In the article, my colleagues and I express concern that we have forgotten about the adults who are going to die as a consequence of smoking. We lose 480,000 Americans every year as a result of smoking. Understandably and justifiably, all Americans were enormously concerned by the toll of COVID-19 this past year. Consider that we have a COVID-level disaster created by smoking every year, year after year after year.

How would you characterize the risks associated with e-cigarettes? What are the potential benefits of vaping for adult smokers?

Vaping is clearly not risk-free, but it is also substantially less dangerous than cigarette smoking. Inhaling combusted tobacco smoke, which includes over 7,000 chemicals, is what causes the disease and death associated with tobacco use.

Multiple types of evidence, identified in our article, demonstrate that vaping can increase smoking cessation. The highly respected Cochrane Review has concluded that it is likely that vaping is more effective than FDA-approved nicotine replacement products like gum and patches. The CDC has also found that more smokers use e-cigarettes than other aids in attempts to quit smoking—and with a higher self-reported success rate.

Still, the public is largely unaware of the potential vaping has to aid in smoking cessation. As I mentioned previously, a majority of adults, including a majority of smokers, believe that vaping is as dangerous as, or more dangerous than, cigarette smoking. This misunderstanding has actually worsened over time. That reflects, in part, the media’s coverage of vaping.

A recent study cited in our article found that 70% of U.S. news coverage on vaping mentioned vaping’s risks to kids, while only 37% noted the potential benefits for adult smokers. As such, it’s likely that fewer smokers are trying e-cigarettes as a method of quitting smoking than would be the case if they were accurately informed about its potential to help them quit and its smaller health risk compared to smoking. That means fewer people are quitting smoking.

Put simply, research shows that the potential benefits of vaping for adult smokers are substantial. Those benefits are not being fully realized in today’s environment of misinformation and a singular focus on the welfare of kids, to the detriment of the health of adults who smoke.

What is known about the risks of youth e-cigarette use?

Vaping does have risks for kids, including the potential of addicting some to nicotine. But in our article, we point to evidence that the percentage of kids being addicted to nicotine by vaping is much smaller than popularly believed.

We also note that while prospective studies have found that vaping by kids who had never smoked increases their risk of trying cigarettes 6-24 months later, much of this may be explained by what is called “common liability,” meaning that kids who try e-cigarettes are more prone to risk-taking than are kids who don’t vape, so the former may be more likely to try cigarettes anyway, even if e-cigarettes had never existed.

Further—and very importantly—even if there is an increased risk, doing the math indicates that this factor would increase overall smoking initiation by kids by only a very small amount. However, even that seems unlikely since we’ve seen smoking rates fall among young people (both adolescents and young adults) at unprecedented rates precisely during the period of vaping’s ascendancy. That certainly is not consistent with the idea that vaping increases smoking.

Why has e-cigarette use in adults not been a focus in policy or the media?

First, the concern for young people’s welfare is a compelling one, and the rapid increase in youth vaping in 2018 and 2019 understandably created a great deal of anxiety. The focus on youth drowned out attention to the welfare of adults who smoke. Youth vaping decreased significantly in 2020. We will have to monitor future years’ trends closely.

Second, I think a lot of people may believe that the problem of smoking is pretty much resolved. I’m referring mainly to the higher education, upper socioeconomic status population. They don’t smoke, their friends and colleagues don’t smoke, there’s no smoking in their workplaces, and there’s no smoking in the restaurants and bars that they frequent. They don’t see smoking and thus may believe the problem has largely been solved.

And yet 1 out of 7 adult Americans is a smoker today. When we take a look at who’s smoking, it’s the underprivileged members of our society, those who don’t have a voice in politics. African Americans as a group, although they don’t smoke more, have higher rates of smoking-produced disease and death than do whites. There are groups like low socioeconomic populations, people with mental health problems and the LGBTQ community that all have higher-than-average smoking rates.

My fear, frankly, is that many nonsmokers are ignoring smokers because they may not care that much about them. There is a very large life expectancy differential between the rich and the poor in the United States and perhaps the single most important behavior-related variable is differences in smoking. The data show that low-income, low-education populations smoke at much higher rates than the high-income population, and they die at much younger ages. If we could reduce smoking among these often marginalized populations, we might be able to reduce the gap in life expectancy. This is fundamentally a matter of social justice.

Currently, we have very unbalanced policies that are directed exclusively at trying to reduce youth vaping. Two of the most prominent are eliminating or seriously restricting flavors in e-cigarettes and trying to equalize the taxation of e-cigarettes and cigarettes. Both of these policies can have adverse consequences for adult smokers. Adult smokers like flavors just like kids do, and in fact, they tend to like the same flavors.