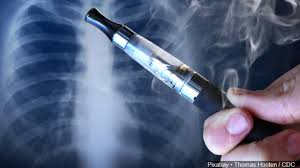 Drs. Dharma Bhatta and Stanton Glantz published a study in February’s American Journal of Preventive Medicine claiming that “Use of e-cigarettes is an independent risk factor for respiratory disease in addition to combustible tobacco smoking.” (here)

In a University of California San Francisco press release, Professor Glantz made additional claims: “We concluded that e-cigarettes are harmful on their own, and the effects are independent of smoking conventional tobacco…This study contributes to the growing case that e-cigarettes have long-term adverse effects on health and are making the tobacco epidemic worse.”

“We find no evidence that current or former e-cigarette use is associated with respiratory disease.”

Trump’s War on Vaping | Intends to “Clear the Market” of...