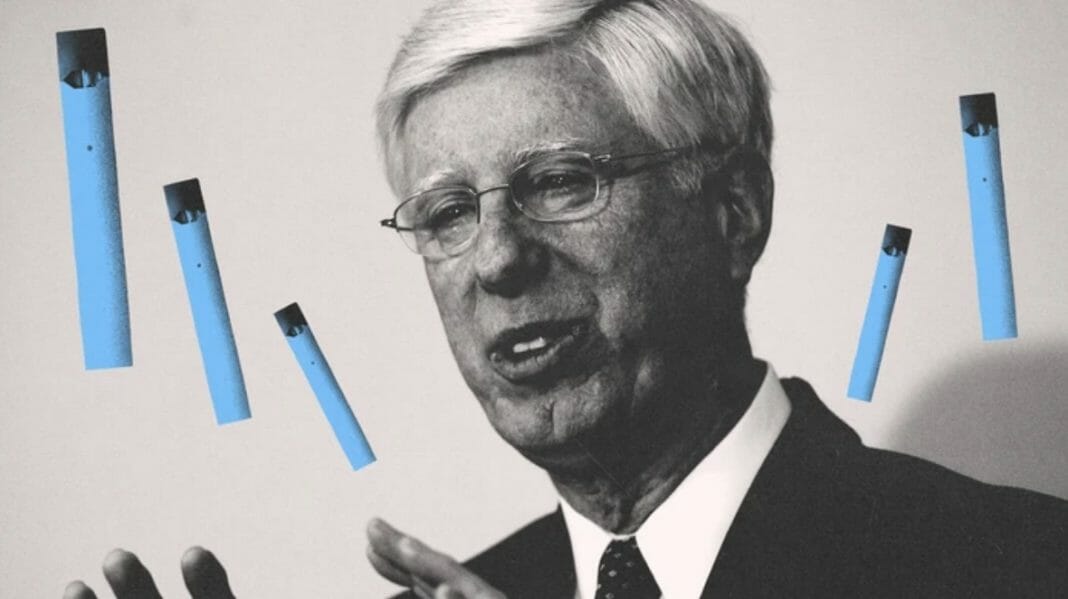 Tom Miller is Iowa’s attorney general. He’s also an adviser to JUUL, even as the company faces controversy and lawsuits.

In a relationship critics call compromising though not necessarily illegal, the attorney general of Iowa has been communicating with and advising JUUL. Emails obtained by VICE show just how much JUUL Labs CEO Kevin Burns, who has shepherded the company through several months of controversy, has relied on AG Tom Miller, as the company has increasingly come under fire for selling an addictive product that appeals to teenagers.

Hundreds of correspondences between JUUL and Miller’s office, obtained through a public records request, show the frequency of communication between the office of Iowa’s top lawyer and the controversial company as Miller helped handle requests from the media and other potential antagonists.

As he finishes up what may well be his last stint in office, Miller, a 74-year-old Democrat, has become an unlikely advocate for JUUL, which some consumer advocates consider the next iteration of Big Tobacco.

This includes lavishly praising the company in public, setting up an advisory counsel for JUUL, communicating frequently with company representatives, and recommending a subordinate for a plum gig at the company. The relationship is especially surprising given Miller’s past as an anti-cigarette crusader, and his relationship with the scandal-laden private company is practically unprecedented for an elected official while in office.

In February, Burns asked Miller for advice on how to respond to criticism from the Food and Drug Administration, and the two seemingly arranged a call despite Miller’s previous statement to Politico that he “does not view himself as an adviser to the company on their relationship with the FDA.” At the time, FDA Commissioner Scott Gottlieb had written a strongly worded letter to JUUL and requested a meeting with Burns to discuss its connection to the tobacco industry. The e-cigarette giant, which has been valued as high as $16 billion, is supposedly on a mission to eradicate old-fashioned cigarettes, but late last year decided to sell more than a third of the company to tobacco giant Altria, which seemed like a contradiction, Gottlieb wrote. “After Altria Group, Inc.’s 35-percent ownership interest in JUUL, many of the company’s statements seem inconsistent with previous representations to the FDA,” his letter said.

Two days later, Burns messaged his assistant saying he wanted to speak with Miller. “Like to get 30 min with the General at his earliest convenience to get his reaction to the FDA letter that I forwarded to him and continue to get his counsel on a few topics,” he wrote in an email.

That missive demonstrates the unusually close relationship that has grown between Miller and JUUL. The attorney general, who has served a record 10 terms and been in office almost continuously since 1979, once called Big Tobacco “the worst industry there is,” and as part of a coalition of state attorneys general helped negotiate the record $200 billion settlement between those companies and the states. Not content to help secure the biggest settlement in American history, Miller went on to broker an agreement with Walgreens in 2002 that made it harder for them to sell to minors. In 2006, he took Hollywood to task over whether movies that feature smokers should be prefaced with a PSA.

No one is accusing Miller of breaking the law, but some experts consider this relationship—in which an elected official is giving advice to a company engaged in multiple lawsuits and a conflict with the FDA—to be stepping over the line that’s supposed to exist between government and private business.

“AG Miller does recall talking to Kevin Burns in February but does not recall the specifics of the conversation,” Miller’s spokesperson told VICE. “He does not view himself as an adviser to the company on its relationship with the FDA. JUUL has many people to turn to who know a lot more about the FDA. Besides, it is not our proper role.” The spokesperson said that Miller has never taken any money from the company and stressed that while Miller continues to “communicate with JUUL on the youth issue,” the advisory committee he formed disbanded in November.

JUUL is sometimes lauded for helping adult smokers switch from cigarettes to an alternative that may be safer. But it’s also been attacked for supposedly hooking teenagers on nicotine, and is now the subject of federal complaints filed in California and New York. Both have alleged that JUUL specifically targets kids, as has a class action lawsuit in Pennsylvania. As Doug Blanke, the executive director of the Public Health Law Center, put it: “Any honest assessment would say there is a division in the world of public health as to whether e-cigarettes are a terrible thing or a good thing.”

In this debate, Miller has come down strongly on the side of JUUL. As Politico first reported in June, he’s unofficially advised JUUL on the process of getting FDA approval, which all e-cigarette makers will need by next year to continue selling their products. While two other attorneys general—in North Carolina and Massachusetts—are suing JUUL for what they claim are deliberate appeals to underage users, Miller announced in April that he was teaming up with the beleaguered company because he supports its stated goal of combating underage use. He even penned a laudatory entry in this year’s edition of TIME‘s 100 most influential people list about JUUL’s co-founders, James Monsees and Adam Bowen, in which he called their device “satisfying and stylish” and noted, “Juul also became too cool for its own good, tempting teens and sparking a panic among parents and policymakers.”

In his capacity as Iowa attorney general, Miller also created a group last year to advise JUUL on “how to avoid the unintended consequences of attracting youth and non-smokers to nicotine products.” Made up primarily of former attorneys general and independent consultants, it also featured longtime Miller aide Donn Stanley, then working for the attorney general. The emails obtained by VICE show that Stanley has since left the public sector on to become vice president of retail commerce in the e-cigarette maker’s general counsel office after getting a recommendation from Miller.

“I can’t think of a historical precedent for a sitting attorney general advising a private corporation, let alone one under state and federal investigation,” said Neil Makhija, a lecturer at the University of Pennsylvania Law School who is one of the lawyers working on a class action suit against JUUL.

It’s not unusual for former government officials to work with companies like JUUL. Health and Human Services officials from boththe Bush and Obama administrations as well as former Massachusetts attorney general Martha Coakley are currently under JUUL’s employ. But the practice of government officials and their staffers becoming advisers or lobbyists for private companies is part of the widely criticized “revolving door” between corporations and the government that allows powerful people to trade money for access and vice versa. Miller’s case is notable because he’s not a former attorney general advising a company, like many of the members of the group he formed for JUUL—he’s a current officeholder who seems to be operating in a role somewhere in between lawyer and lobbyist.

Miller said nothing he has done is illegal and that he hasn’t accepted any money from JUUL, but an ethics expert said that his behavior is still questionable.

“Even where the actions by the AG do not violate the letter of the law, certain acts could violate the spirit of the law and undermine public confidence in government,” said Beth Rotman, director of money and politics in ethics at the think tank Common Cause. “This is certainly the case if there is an appearance that a public official is acting in the interest of a private business where he or she should be acting in the public interest.”

JUUL continues to wage legal battles on multiple fronts. In May, two Alabama college students sued JUUL, Altria, and tobacco company Philip Morris for marketing e-cigarettes to them as minors and concealing the negative effects; both teenagers say they’ve dealt with health consequences after vaping. Notably, that suit called out JUUL for working with Altria and benefiting from its infrastructure, i.e. its ownership of prime retail real estate that was once full of cigarette packages but is increasingly full of JUUL pods. That case, and another one filed by plaintiffs in New Jersey and Pennsylvania, have since been rolled into a California suit.

The attorneys general in North Carolina and Massachusetts are continuing their investigations, and their counterpart in Connecticuthas launched his own just this month. Iowa has not taken any similar action.

More than 6 million US middle and high schoolers used tobacco...

WHO warning on vaping draws harsh response from U.K. researchers

DID SOMEBODY LEAVE THE GASLIGHT ON?