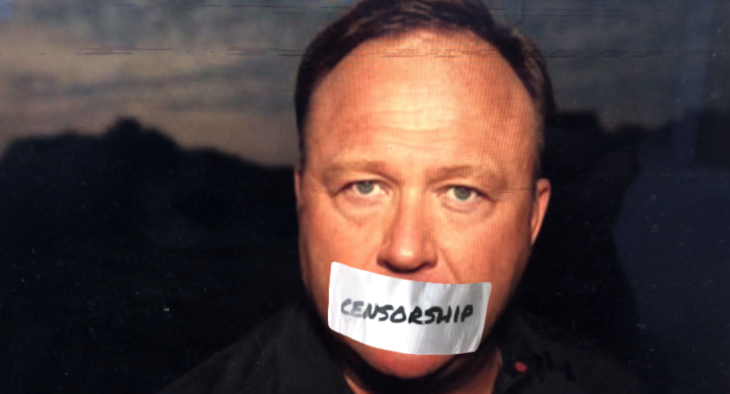 Apple confirmed on Monday that it had removed five out of Jones’ six podcasts, which includes the infamous “The Alex Jones Show” as well as a number of other InfoWars audio streams. The news was originally reported by BuzzFeed News.

Facebook and Google made similar decisions later on Monday. Facebook removed four pages controlled by him, while Google removed the official “Alex Jones Channel” on its platform. The YouTube channel for InfoWars, the media company owned by Alex Jones, still remains live. Pinterest also removed the InfoWars board, while Spotify took down his most well-known show completely.

Jones, a controversial conspiracy theorist who has claimed that the 2012 Sandy Hook school shooting was a hoax, had recently been hit by warnings and content removals from online platforms.

“Apple does not tolerate hate speech, and we have clear guidelines that creators and developers must follow to ensure we provide a safe environment for all of our users,” an Apple spokesperson said in a statement on Monday.

“Podcasts that violate these guidelines are removed from our directory making them no longer searchable or available for download or streaming. We believe in representing a wide range of views, so long as people are respectful to those with differing opinions.”

The company said it made the decision after receiving additional complaints about inappropriate content on Jones’ pages. The pages were removed “for glorifying violence, which violates our graphic violence policy, and using dehumanizing language to describe people who are transgender, Muslims and immigrants, which violates our hate speech policies.” The decision was made independently of any other companies removing content from their sites, a Facebook spokesperson said.

In July, Facebook removed four of Jones’ videos and hit his own personal profile with a 30-day ban over what the firm deemed as a violation of its policies on bullying and hate speech. The company said at the time the official InfoWars page, among others where Jones was an administrator, were getting close to the threshold of being banned from the site due to repeated violations.

The company explained on Monday that when it deletes content, the removal counts as a strike — essentially a warning — against the person that uploaded it. In the case of pages, Facebook said it holds both a page and an administrator who posts content in violation of its rules accountable.

But it also said that the reason for removing Jones’ pages was in no way related to concerns over fake news.