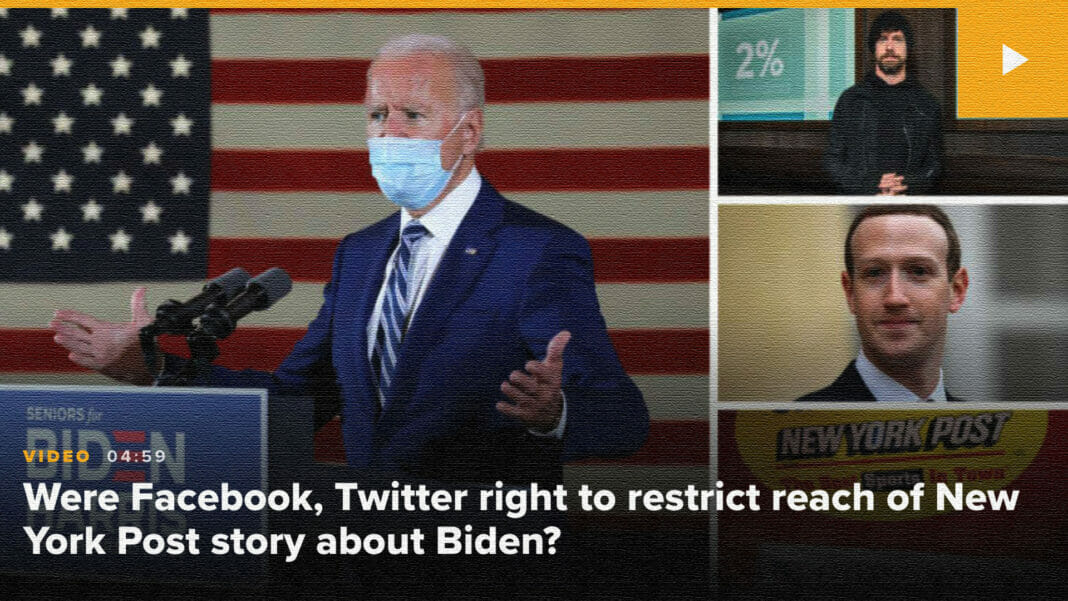 Facebook and Twitter on Wednesday limited the distribution of a New York Post story that claims to show “smoking gun” emails related to Democratic presidential nominee Joe Biden and his son.

“While I will intentionally not link to the New York Post, I want be clear that this story is eligible to be fact checked by Facebook’s third-party fact checking partners,” tweeted Andy Stone, a spokesman for Facebook. “In the meantime, we are reducing its distribution on our platform.”

The unverified story alleges then-Vice President Biden’s son Hunter Biden attempted to introduce to a top executive at a Ukrainian company Hunter Biden worked for to his father.

Andrew Bates, spokesman for the Biden campaign, responded to the New York Post’s story in a statement:

“Investigations by the press, during impeachment, and even by two Republican-led Senate committees whose work was decried as ‘not legitimate’ and political by a GOP colleague have all reached the same conclusion: that Joe Biden carried out official U.S. policy toward Ukraine and engaged in no wrongdoing. Trump Administration officials have attested to these facts under oath,” Bates said.

“The New York Post never asked the Biden campaign about the critical elements of this story,” he added. “They certainly never raised that Rudy Giuliani — whose discredited conspiracy theories and alliance with figures connected to Russian intelligence have been widely reported — claimed to have such materials.

“Moreover, we have reviewed Joe Biden’s official schedules from the time and no meeting, as alleged by the New York Post, ever took place.”

President Donald Trump took to Twitter Wednesday evening to criticize the social networks’ decisions to limit the distribution of the story.

In his tweet, Trump called for a repeal ofSection 230 of the Communications Decency Act, a rule protects tech companies from liability over the content posted by users on their online services while allowing them to moderate it.

“So terrible that Facebook and Twitter took down the story of ‘Smoking Gun’ emails related to Sleepy Joe Biden and his son, Hunter, in the @NYPost,” Trump tweeted. “It is only the beginning for them. There is nothing worse than a corrupt politician. REPEAL SECTION 230!!!”

The editorial decision to reduce the spread of the story is a significant one for Facebook. The social media company has long professed to stand for freedom of speech and rejected the idea that it be an arbiter of truth.

But the company has pulled a 180 recently, banning numerous types of problematic content on its services, including anti-vaccination ads, Holocaust denial, and pages and groups espousing the QAnon conspiracy theory.

Twitter blocked the story later on Wednesday. It decided to limit the spread of the article due to the lack of authoritative reporting around the origins of the information in it, a spokeswoman for the company said.

Specifically, the article was found in violation of Twitter’s Hacked Material Policy, which doesn’t “permit the use of our services to directly distribute content obtained through hacking that contains private information, may put people in physical harm or danger, or contains trade secrets.”

Later in the day, Twitter clarified it was banning links to the article because it contained images of hacked material with personal and private information, and that discussion or commentary on the hacked materials should not be banned. Twitter CEO Jack Dorsey described the company’s initial decision to block the article without explaining its reasoning as “unacceptable.”