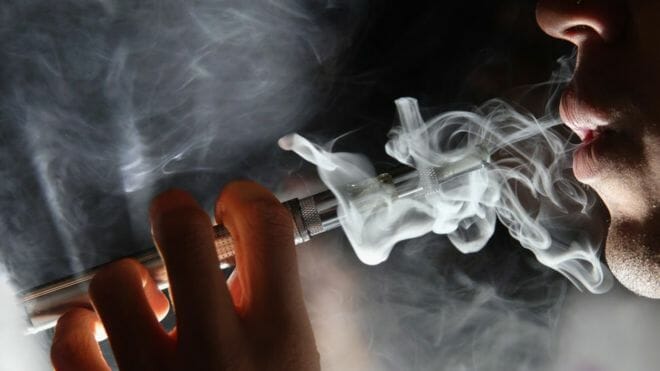 A patient has died after developing a severe respiratory disease due to vaping in the first such death in the US, say health officials.

It comes as experts investigate a mystery lung disease across the US that is linked to use of e-cigarettes.

The Centers for Disease Control and Prevention (CDC) said there were 193 “potential cases” in 22 US states.

Many of the cases involve vaping THC, the main active compound in cannabis, CDC experts said.

The cases were reported over the course of two months between 28 June and 20 August.

The person who died was “hospitalized with unexplained illness after reported vaping or e-cigarette use”, Dr Jennifer Layden, the chief medical officer and state epidemiologist in Illinois, said.

CDC director Robert Redfield said: “We are saddened to hear of the first death related to the outbreak of severe lung disease in those who use e-cigarette or ‘vaping’ devices.”

He added: “This tragic death in Illinois reinforces the serious risks associated with e-cigarette products.”

What is the illness?

The cause of the mystery illness has not been identified, but all involve vaping in some form.

“In many cases, patients have acknowledged recent use of THC-containing product,” the CDC’s head of non-infectious diseases, Dr Ileana Arias, said.

Those affected had symptoms including coughing, shortness of breath and fatigue as well as some cases of vomiting and diarrhoea. There is no evidence of an infectious disease – such as a virus or bacteria – being responsible.

Brent Stafford
Beaten, bloody and bruised best describes the U.S. vaping industry in 2018. From the public health assault on flavors to the...

7 Reasons Why Pod Vapes Are So Popular