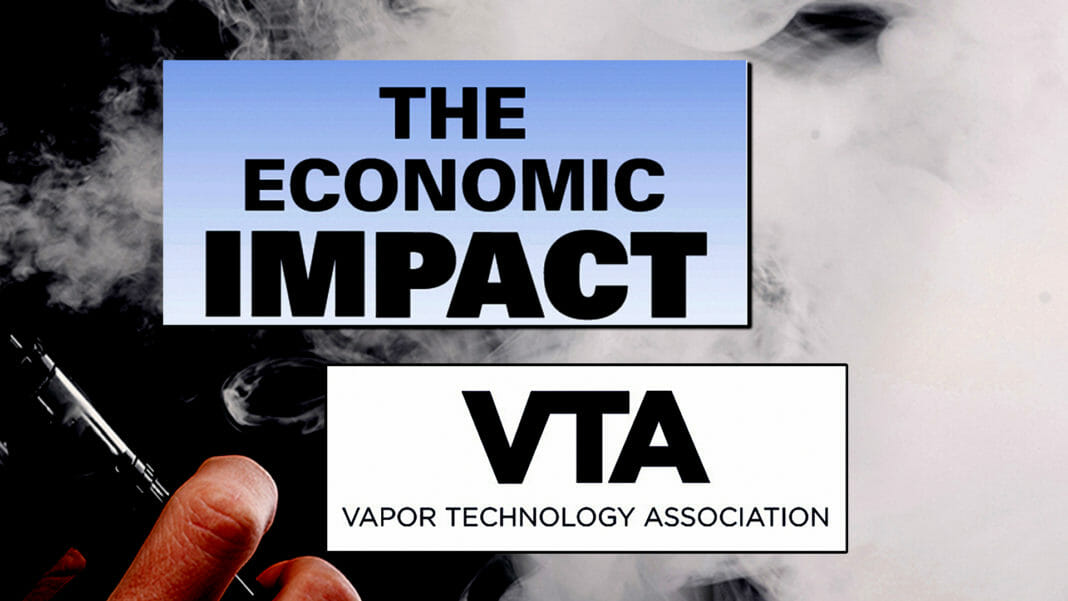 Washington, D.C., November 22, 2019 — The Vapor Technology Association (VTA) today released an analysis called the “Economic Impact of a Ban on Flavored Vapor Products” by economist John Dunham & Associates (“Dunham”) that reveals that more than 150,000 jobs would be lost in the independent vapor industry if the Trump Administration moves forward with a ban on flavored vapor products.

The new report analyzes sales of flavored vapor products in the independent vapor distribution chain and finds that approximately 91.6% of sales of vapor products are flavors other than tobacco (with 85.7% being other than tobacco and menthol). Dunham concludes that “if a flavor ban was implemented, the independent vapor segment of the market would cease to exist in any meaningful way since the vast majority of the 13,480 independent vapor shops in the country (which currently generate 58,430 full-time equivalent jobs) would likely have to close. No business can continue to exist were it to lose 90 percent of its revenue.”

Dunham previously analyzed the size and significant economic impact of the vapor technology industry in the United States in his report, The Vapor Industry Economic Impact Study (2018), prepared for Vapor Technology Association, April 29, 2019. This report found that the vapor product industry is an important part of the U.S. economy, generating 166,000 jobs, $7.9 billion in wages and benefits for those workers, $15.0 billion in federal, state and local taxes, and a total economic impact of $24.5 billion.

Tony Abboud, Executive Director of the Vapor Technology Association, said, “This updated economic impact analysis proves that a flavor ban is simply the wrong policy. Fortunately, there are many smarter ways to attack the issue of youth vaping outlined in our comprehensive plan “21 & Done!” without eliminating the independent vapor distribution chain, made up of more than 14,000 small businesses around the country that are competing everyday with Big Tobacco.  Bans don’t work; they never have. However, 21 & Done! proposes real solutions, including raising the age to 21, implementing 21 specific marketing restrictions, requiring third-party age verification technology at retail, and a ‘three strikes and you’re out’ penalty scheme for retailers.”

ABOUT VTA
The Vapor Technology Association is the U.S. industry trade association whose 1,000+ members are dedicated to innovating and selling high quality vapor products that provide adult consumers with a better alternative to traditional combustible cigarettes. VTA represents the industry-leading manufacturers of vapor devices, e-liquids, flavorings, and components, as well as the largest wholesalers, distributors, importers, and e-commerce retailers, in addition to hundreds of hardworking American mom and pop brick-and-mortar retail store owners throughout the United States.

Cigarettes sales to be phased out by Philip Morris Int within...

Restricting e-cigarettes could increase the number of young smokers