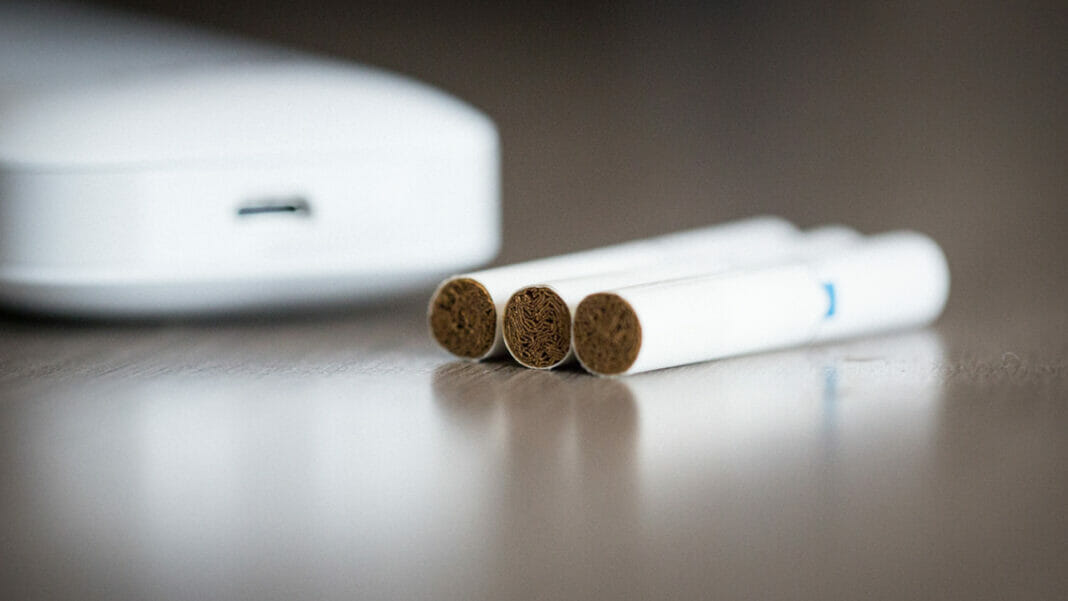 What parents and teens need to know about heat-not-burn cigarettes.

In the last decade, the popularity of traditional cigarettes — particularly among teenagers — has declined tremendously, while the use of electronic cigarettes has been on the rise.

But now a new smoke-free alternative called heated tobacco is slowly gaining a foothold in the U.S. market. Also known as heat-not-burn tobacco products, the devices heat up a cigarette without using an open flame.

The heated cigarette produces an aerosol that contains the nicotine as well as other chemicals and additives. The device is more similar to a traditional cigarettes than an e-cigarette or a vape device, which don’t contain tobacco, because the nicotine is coming directly from the cigarette.

“They’re attempting to make the packaging and the marketing look white and clear and clean and very modern,” said Erika Sward, assistant vice president for advocacy at the American Lung Association. “But we can’t afford to be fooled again on another tobacco product.”

“The tobacco industry is always looking for new ways to get new people to smoke and use nicotine products and be hooked for life,” said Dr. Maria Rahmandar, medical director of the Substance Use and Prevention Program at Lurie Children’s Hospital in Chicago.

So far, only one such device — made by one of the world’s largest tobacco companies, Philip Morris International — has been authorized by the U.S. Food and Drug Administration. Dr. Moira Gilchrist, vice president of strategic and scientific communications at Philip Morris International, told ABC News that the company’s heated tobacco product “is not for youth at all.”

“We place a really high emphasis on making sure we’re selling a product only to the right people, and that we’re not attracting the wrong audience,” Gilchrist added.

Despite this sentiment, teens are still curious — and at risk.

While heated tobacco products only became legal in the United States in 2019, the device have already started to catch the attention of high school students. Nearly one in 10 of California’s 10th and 12th graders have heard of heated tobacco products, with the vast majority saying they first learned about them from the internet or social media, according to a study published in Pediatrics, the official peer-reviewed journal of the American Academy of Pediatrics.

Although the survey found that less than 1% of California teens have actually used heated tobacco products, researchers are worried.

“Our concern is that this is a new product and the design is kind of slick,” the study’s co-author, Dr. Shu-Hong Zhu, who is also the director of the Center for Research and Intervention in Tobacco Control at the University of California, San Diego, told ABC News. “Our goal was to raise the alarm. We fear this might be like the new e-cigarettes.”

Almost one in five students surveyed said they would try heated tobacco products if offered to them by a friend. This number doubled for students who have already used e-cigarettes or vape devices, according to the study.

Heated tobacco products have been marketed as a better alternative to smoking, but the American Academy of Pediatrics warns the devices contain about the same amount of nicotine as traditional cigarettes and give off secondhand aerosol that is unsafe to breath.

“If someone is interested in quitting smoking there are ways that are safe and effective,” Sward said. “This is a product that is aimed at continuing someone’s addiction.”

“Any time [parents] or their children are inhaling these kinds or any type of chemicals into their lungs, they’re putting their health at risk,” Sward warned.

As teens head back to school this fall, experts are urging families to be aware of these new, dangerous products.

Chidimma J. Acholonu, M.D. M.P.H. is a pediatric resident physician at the University of Chicago and a contributor for the ABC News Medical Unit.

The WHO’s bizarre war on e-cigarettes | The Spectator

Curate RegWatch
When the COP26 climate change conference hits Glasgow at the end of October, the media will be out in force to...