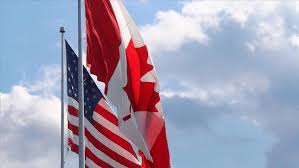 Olivia Walker hadn’t been able to see her fiance, Daryl Higgins, in person for more than seven weeks. Not since the border between Canada and the U.S. closed to all non-essential travel in mid-March as a result of the pandemic.

The couple was set to marry in May, but everything changed after the border shut down.

That’s because Walker is a Canadian citizen living in Chatham, Ont. with her 13-year-old daughter and Higgins is an American residing in Indiana.

“We thought ‘OK, now this won’t go on forever. It was supposed to be over in early or late April or May,” she told CTVNews.ca during a telephone interview on Tuesday. “We thought ‘just hold tight.’”

Before the novel coronavirus outbreak upended their lives, they had planned to marry in Indiana before Higgins would move to Detroit, which is only a 45-minute drive from Chatham. She said, that way they would still be close to each other while her daughter finishes high school in Chatham.

When the border closure was extended last month until May 21, Walker said they realized they may be separated for longer than they initially expected. And on Wednesday, Prime Minister Justin Trudeau said the government is in talks with the U.S. to have their shared border closed for another month.