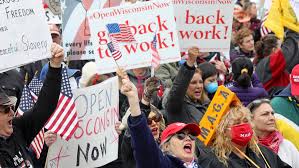 The Wisconsin Supreme Court has overturned the state’s stay-at-home order, ruling it “unlawful” and “unenforceable” in a high-profile win for the state’s Republican-led Legislature.

In a 4-3 decision Wednesday, the court ruled that Democratic Gov. Tony Evers’ administration overstepped its authority when the state Department of Health Services extended the order to May 26.

The ruling comes after the Legislature’s Republican leaders filed a lawsuit last month arguing the order would cost Wisconsin residents their jobs and hurt many companies, asserting that if it was left in place, “our State will be in shambles.”

The suit was filed specifically against state Department of Health Services Secretary-designee Andrea Palm and other health officials, who made the decision in mid-April to extend the state’s “Safer at Home” emergency order. At the same time as the extension, the state loosened some restrictions on certain businesses, including golf courses, public libraries, and arts and crafts stores.

But the justices wrote in their decision Wednesday that “an agency cannot confer on itself the power to dictate the lives of law-abiding individuals as comprehensively as the order does without reaching beyond the executive branch’s authority.”