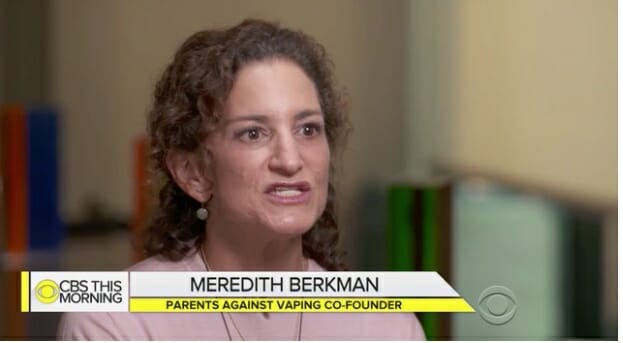 Meet Parents Against Vaping e-cigarettes. Formed this year at the height of JUUL fever, PAVe (that’s how they spell it) is led by wealthy and influential New Yorkers who take their moralistic war on vaping very seriously, or at least they seem like they do. And unlike an organization you might start with a couple of your friends, this one immediately grabbed national press exposure.

“Meredith Berkman, a mother of four, says she couldn’t sit and wait for the government to stop kids from using Juul,” says a CBS This Morning story from Aug.28. “So she and two other moms recently launched the grassroots group Parents Against Vaping E-cigarettes to educate about the dangers of e-cigarettes, advocate against their use and lobby for legislative action.”

The messages on the PAVe website are unlikely to convince teenagers, but they may scare parents. “YOU GOT JUULED,” goes one. “Some rich dudes put a sleek electronic costume on a regular old cigarette and you’re puffing on it like it’s oxygen. Hate to break it to you but…you just got JUULed.” It’s funny to hear the richest people in the country accuse the JUUL founders of being “rich dudes” trying to fool the public.

Why are lawmakers more concerned with youth vaping than opioid abuse?

Curate RegWatch
In the latest installment of the youth vaping fear-mongering campaign, U.S. Sen. Jeanne Shaheen (D-N.H.) has called the reported increase in the number...

Colorado teen drug, alcohol and nicotine use may have fallen during...