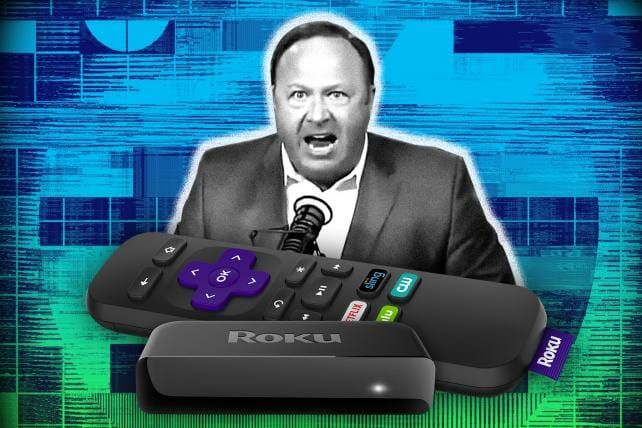 UPDATE: Hours after this story was posted, Roku tweeted that it would delete InfoWars from the platform.

Months after being banned by major platforms like Apple and YouTube, Alex Jones and InfoWars have found a new home on Roku, where a streaming channel for the site was discovered this week.

A spokeswoman for Roku said that the company does not have a financial relationship with InfoWars and does not deliver any ads to the channel, but that so far Alex Jones’ network, which has been widely criticized for promoting conspiracy theories, has not broken any rules to warrant a ban.

“While the vast majority of all streaming on our platform is mainstream entertainment, voices on all sides of an issue or cause are free to operate a channel,” a Roku spokeswoman said by e-mail on Tuesday. “We do not curate or censor based on viewpoint.”

Digiday was first to report Tuesday on the news regarding InfoWars’ new safe haven.

Jones has been a source of trouble for platforms with his daily streaming show that is rife with talk of conspiracies and fear mongering. He is perhaps most famous for claiming that the 2012 Sandy Hook shooting was a false flag operation and that the victims’ families were actors.

InfoWars was banned by YouTube in August for videos that included hate-speech and depicted violence. Facebook followed suit by removing pages affiliated with Jones, but new pages have since sprung up on the social network to stream his show.

Now, Roku is facing heat for letting InfoWars onto its service, with some users on Twitter claiming they would look for rival services like Amazon Fire TV in response. And the attorney representing the Sandy Hook victims’ families, who are suing Jones, blasted Roku for allowing the channel to operate and asked the company to change its position.