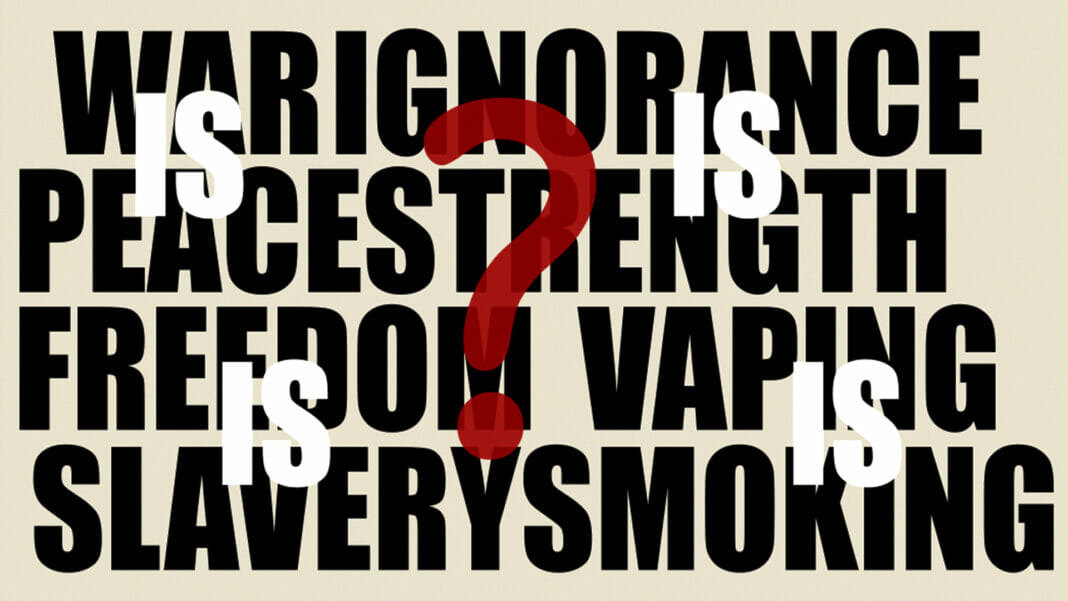 Liquid is smoke. Products that do not contain tobacco are tobacco products. If these statements have a familiar ring, it is because you may remember reading George Orwell’s Nineteen Eighty-Four… or at least heard about it. In Orwell’s dystopian future, 1984, the totalitarian government of Oceania promotes “Doublespeak” as a means of thought control.

Doublespeak was a way to communicate Doublethink which, according to Orwell, is “to know and not to know, to be conscious of complete truthfulness while telling carefully constructed lies, to hold simultaneously two opinions which cancelled out…, to use logic against logic, to repudiate morality while laying claim to it…” The most well-known examples of Doublespeak include “War is Peace” and “Freedom is Slavery.”

Strangely, the leaders of the world’s first (and, so far, only) global health treaty are now actively working to revive such “Orwellian” ideas. In the lead up to the 2021 November 9th Conference of Parties (COP9) of the Framework Convention on Tobacco Control (FCTC), the FCTC Secretariat has released background documents. The latest one is a doozy. Its name: FCTC/COP/9/10 “Challenges posed by and classification of novel and emerging tobacco products.” It includes these Doublespeak gems:

Brent Stafford
Access and choice, these two principles are at the heart of every regulatory battle over vaping. With the government of Canada’s...