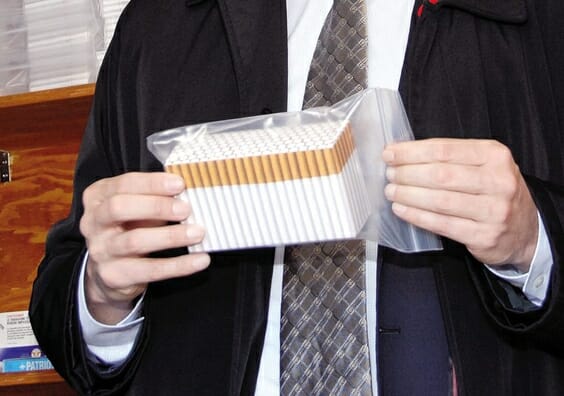 Now, it’s unlikely that many of us has $6,255 in cash simply lying around on the bedside table.

In fact, I’ve never even held a thousand in cash.

Oh, I was present once with a known manufacturer of contraband cigarettes in the Montreal-area Mohawk territory of Kahnawake when he waltzed into his credit union, engaged the teller in some familiar small talk, and had $60,000 in cash counted out for him and put into a brown paper bag as if it were no big deal.

And it likely wasn’t.

It was payment — always in cash — for an in-demand freelancer known for his superb work repairing cigarette manufacturing machines.

I watched as the money was tossed on a chair next to him as it if were small change instead of $60,000 in a massive wad of 100s.

Coming back from Montreal from Kahnawake that day, the right rear tire of my Jeep incidentally flew off. The lug nuts had been loosened.I assumed it wasn’t a coincidence.Now, when police bust a felon who has a large amount of cash lying around, it usually means contraband tobacco is involved because if offers a major cash return for a nominally low risk.
A case of 50 cartons of cigarettes — or 500 individual packages — can be purchased at any Mohawk reserve for around $750.That works out to $1.50 a pack.Read full article here.

Curate RegWatch
The World Health Organization’s reputation took another big hit at a conference in London earlier this month that discussed global vaping...

A Year of Progress, But Youth E-Cigarette Use Still At Epidemic...