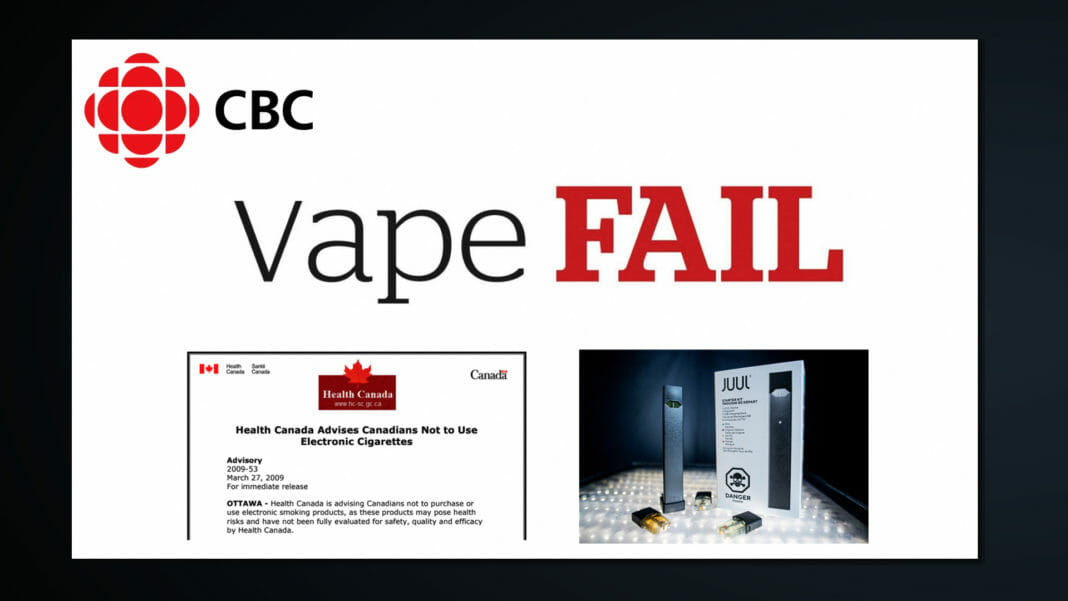 Less than two years ago, the federal government officially welcomed the vaping industry to Canada. The belief among policy-makers and public health experts was that e-cigarettes were safer than combustible cigarettes and would help smokers kick their habit. That’s not what happened.

This story is part of Vape Fail, a CBC News series examining some of the policy failures that led to the adoption of vaping as a smoking alternative and the resulting consequences.

Yet Canada has chosen to implement a nationwide smoking-cessation strategy to make nicotine vaping devices as accessible as possible.

It was an unusual public health decision for regulators to deliberately craft a law to encourage the sale of an addictive product.

The federal government’s goal was “to strike a balance between protecting youth from inducement to nicotine and tobacco use, while allowing adult smokers to legally access vaping products,” Health Minister Jane Philpott told a Senate committee on April 12, 2017, as the legislation was being debated before final approval.

The resulting law, which came into effect in May 2018, means vaping devices have fewer restrictions than tobacco and cannabis under Canada’s Tobacco and Vaping Products Act.

Unlike cannabis, vaping devices can be sold anywhere, and unlike tobacco, there are no warning signs on packages and the sale of fruit flavours is allowed.

Canada’s vaping approach was based on a hypothesis — that the minority of Canadians who still smoked might switch to vaping.

Federal health officials knew when they drafted the law that they did not have definitive evidence that e-cigarettes were effective at helping people quit smoking.

And today it’s becoming clear that the utopian post-tobacco vision is not materializing the way it was imagined.

“The majority of smokers do not switch,” said Dr. Charlotta Pisinger, a leading researcher on tobacco prevention at the University of Copenhagen in Denmark. “It was wishful thinking. The smokers didn’t do as we wanted them to do.”

Curate RegWatch
The Food and Drug Administration (FDA) tried to ban child-friendly vaping flavors back in 2015, but heavy lobbying from the vaping...