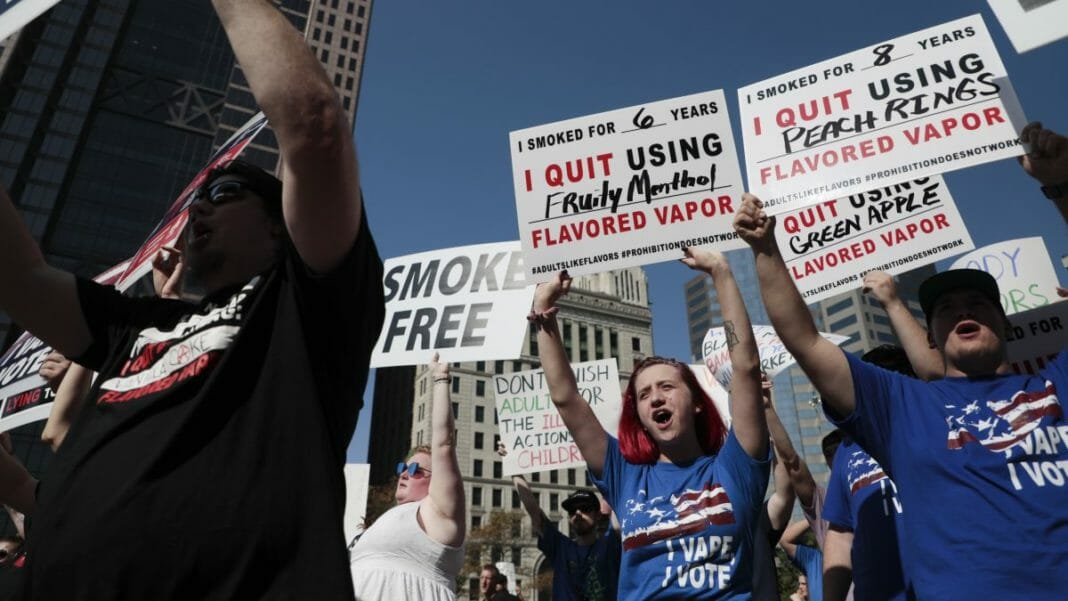 Several groups opposed to a wide-ranging ban said Tuesday that meetings this week with the Office of Management and Budget had been canceled — a signal the Trump administration was abruptly scrapping consultations and possibly preparing an announcement.

Paul Blair, the director of strategic initiatives at Americans for Tax Reform and a proponent of e-cigarettes, said in a tweet that OMB had canceled a meeting with him about the planned guidance from the Food and Drug Administration.

“Since the rule is no longer under review,” the OMB couldn’t grant further meetings on it, according to an image of an email from the agency tweeted by Blair.

My meeting with OMB for Friday morning has been cancelled because the FDA guidance on flavors is no longer under review. We will have an announcement from the FDA in a few hours and I doubt it will be good.

The FDA has been working on drafting guidance concerning the sale of flavored vaping products since September, when Health and Human Services Secretary Alex Azar said the agency would clear the market of all such products except those that taste like tobacco, amid a surge in youth e-cigarette use.

Since then, there have been signs that the administration may allow menthol vaping cartridges and pods, and potentially other flavors, to remain on the market. Republican lawmakers have balked at tighter curbs, and some advisers to the president have told him limiting vaping could hurt him with his base.

Several pro-vaping and small-business groups had meetings planned to discuss the draft guidance with the OMB’s Office of Information and Regulatory Affairs in coming weeks. But those meetings were removed from the schedule by Tuesday morning.

“It feels like a slap in the face,” said Gregory Conley, president of the American Vaping Association. “You had a lot of store owners and manufacturers from across the country that requested meetings, and booked flights and hotels, only to get an email at 2 o’clock in the morning.”

Representatives for the White House and for the OMB didn’t immediately respond to requests for comment.

It wasn’t clear when the FDA might publish the flavor guidance. A spokesman for the agency declined to comment on the timetable.

“We’re all somewhat in the dark here as to what the agency’s thinking is,” said Will Woodlee of Kleinfeld, Kaplan & Becker, a Washington law firm representing e-cigarette maker Njoy and other vaping groups.

The vaping industry has been bracing for the rules, which would be one of the sharpest steps yet taken by the government to limit the reach of the nascent industry. Already, some big players have curtailed sales of products that appeal to young users. Juul Labs Inc., maker of the most popular e-cigarette, said last month it would no longer sell mango and cucumber, among other flavors.

Vaping groups have argued that severely limiting flavors could deprive adult smokers of a viable alternative to smoking, and do damage to small shops and other businesses that have sprung up around e-cigarettes.

“We’re one year away from a presidential election and this administration decides to greenlight a regulation that’ll kill more than 10,000 small businesses and limit the choice of 9 million people who use these products in battleground states,” Blair said.

Public-health officials are attempting to balance those considerations against a sharp jump in e-cigarette use by teens and the outbreak of a mysterious lung ailment that has killed about three dozen people in the U.S. and sickened nearly 1,900. Most of those people reported using THC products, though some said they also used nicotine vapes.

New data show a spike in the number of underage people vaping; according to the 2019 National Youth Tobacco Survey, about 4.1 million high-school and 1.2 million middle-school students will have used vaping products this year. Mint and menthol were reported to be especially popular flavors with young users.

Vaping advocates have pushed to preserve access to a wider range of flavors for adults. They say having more options makes vaping a more appealing alternative to smoking cigarettes, which is still the leading cause of preventable death and disease in the U.S. Smoking-related illness cause about 480,000 deaths per year, according to the U.S. Centers for Disease Control and Prevention.

Some small-business groups have said that companies like Juul will likely be able to withstand a more limited market for flavors, but that for more modest-sized firms the limits could be fatal.

“When you ban all flavors except for menthol and tobacco, it’s a government granted monopoly to big tobacco companies,” said Amanda Wheeler, executive director at Arizona Smoke Free Business Alliance. “Those products can survive off of having only tobacco and menthol.”

Michael Bloomberg, the founder and majority owner of Bloomberg LP, the parent company of Bloomberg News, founded a charitable foundation that has spent $160 million on an initiative of the Tobacco-Free Kids group to fight flavored e-cigarettes.

CBC Kids News | Government fails and tips on how to...

Curate RegWatch
These vaping statistics might surprise you Is vaping addictive? When CBC Kids News asked a group of students at Garden City Collegiate in...

Vaping Is Now Taxed Nearly Twice As Much As Smoking In...