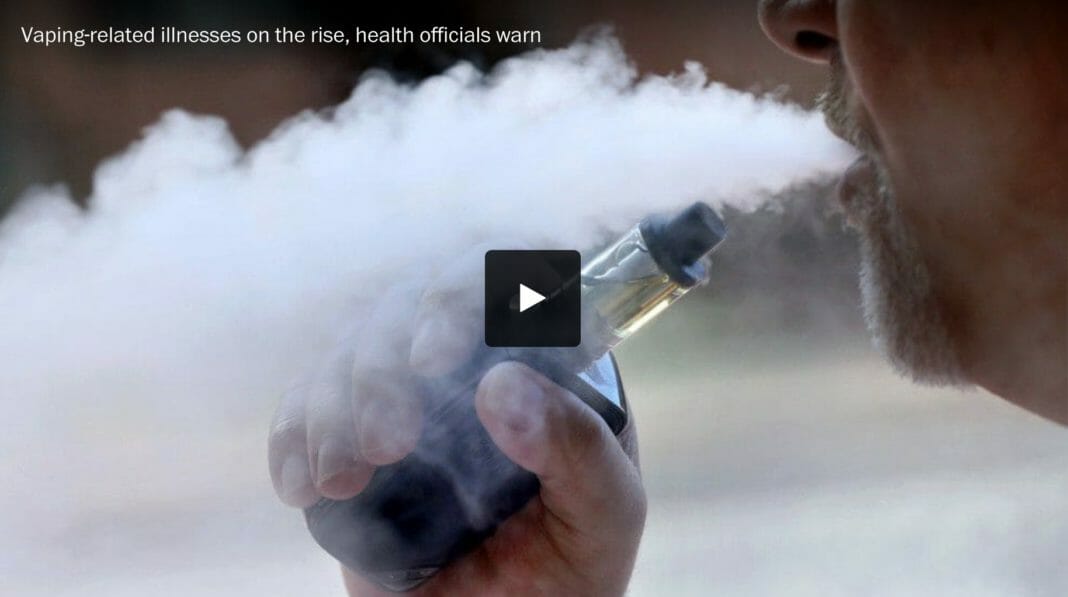 Federal officials said Thursday that at least 530 people in 38 states have become sickened by a mysterious vaping-related lung illness, part of a growing national outbreak.

In a sign of the seriousness of the e-cigarette investigation, officials disclosed that the enforcement arm of the U.S. Food and Drug Administration has been conducting a probe in parallel with the public health investigation led by the Centers for Disease Control and Prevention. Officials said they still do not know the cause of the lung injuries that are making people so sick. There have been seven confirmed deaths.

All reported cases had a history of e-cigarette or vaping use, officials have said. Initial data shows that most people had a history of using e-cigarette products containing THC, that many people said they used both nicotine and THC, and that some reported using only nicotine products. Many people have also said they used black market or illicit THC products. THC is the active ingredient in marijuana that produces the high.

FDA officials said investigators from its Office of Criminal Investigations have been pursuing a parallel investigation since shortly after the illnesses were first reported this summer. That office conducts criminal investigations of illegal activities involving FDA-regulated products, arresting those responsible and bringing them before the Justice Department for prosecution.

To allay fears of sick patients who have used illicit marijuana products, some of whom have been reluctant to share information with public health officials, the FDA is not pursuing prosecution of people for personal use of any controlled substances.

“The focus is on the supply chain,” said Mitch Zeller, director of FDA’s Center for Tobacco Products. “We’re very alarmed about products containing THC,” he said, even if THC has not been present in every case.

In some states where marijuana is not legal, the only way for someone to purchase a THC product is “buying it in an alley or on the street,” Zeller said. “I would be very, very careful about doing that,” he warned, because consumers have no way of knowing “what might have happened along the way.”

Health officials are warning people who are concerned about these specific health risks to consider refraining from using e-cigarette or vaping products. If adults are trying to quit smoking by using nicotine-containing e-cigarettes, they should not return to smoking cigarettes.

Marijuana industry experts have said that black-market operators have added thickening agents to THC oil that is used to fill vape cartridges. At least one such “cutting agent” used to dilute solutions, vitamin E acetate, an oil derived from vitamin E, has been found in samples tested by state labs and the FDA’s forensics lab. But officials cautioned again Thursday that they have not identified a single e-cigarette product or substance as the underlying culprit. A form of chemical exposure is suspected of making patients ill.

The FDA is analyzing more than 150 samples collected from patients across the country who have fallen ill and is testing them for a broad range of chemicals, including nicotine, THC, cutting agents and other substances.

Vitamin E acetate is commonly available as a nutritional supplement and is used in topical skin treatments. It is not known to cause harm when ingested as a vitamin supplement or applied to the skin. Its name sounds harmless, experts said, but its molecular structure could make it hazardous when inhaled. It could be associated with the kinds of respiratory symptoms that many patients have reported: cough, shortness of breath and chest pain, officials said. In some instances, they have also reported vomiting or diarrhea.

“This is a complex investigation that spans many states and involves hundreds of cases and a wide variety of substances and products,” Anne Schuchat, the CDC’s principal deputy director, said during a call with reporters. “We at CDC are very concerned about the occurrence of life-threatening illnesses in otherwise healthy young people reported from around the country.”

Schuchat said a variety of hypotheses are being considered. “There may be a problem with source material or modification that may be occurring at different places,” she said, adding that “it may take some time” to obtain definitive answers.

A snapshot of the sick patients show a higher proportion of boys and men compared with those who typically use e-cigarette devices. More than half of the reported cases are in people under 25, Schuchat said. Boys and men make up three-fourths of the patients; two-thirds of patients are between 18 and 34, and 16 percent are younger than 18.

Some of the additional reported cases Thursday are from investigations conducted by state health departments several weeks ago, Schuchat said. But new cases continue to be reported in the ongoing outbreak, she said.

Illinois’s chief medical officer, Jennifer Layden, said state officials hope to find more clues by collecting information from people who currently vape but have not gotten sick. Some of Illinois’s 69 patients are unable to talk to health-care professionals because of the severity of their illnesses or because they are reluctant to share information about illicit products they have used, she said.

Officials plan to use social media to solicit responses for an anonymous survey about vaping habits to help identify what is making people sick, she said.

On Monday, California reported the death of a 40-year-old man from vaping-related illnesses. That death is at least the fifth reported in a middle-aged or older person.

Brent Stafford
California’s war on vaping escalated to new heights when the City and County of San Francisco rammed through new regulations banning...

Is Vaping A Safe & Successful Way For Cigarette Smokers to...