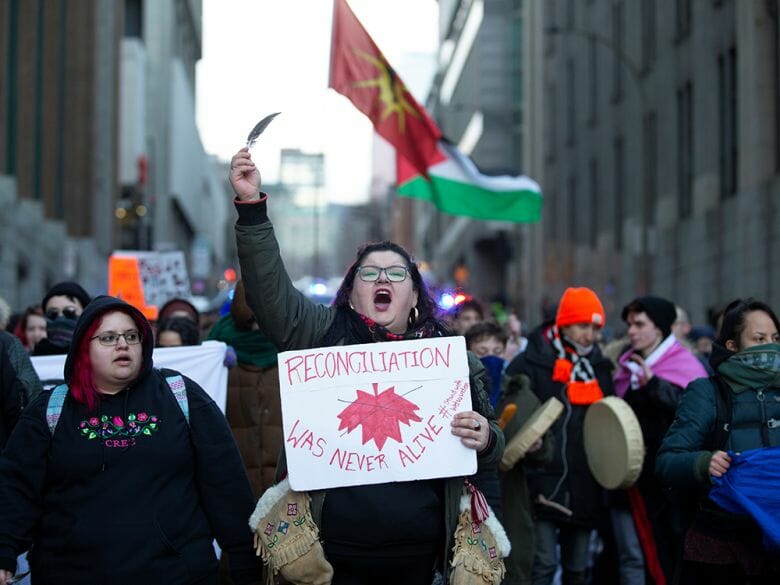 Those were the words emblazoned on a mock Canadian flag that went up in flames atop a bonfire blocking the Morice River Service Road, 66 kilometres into the bush from Highway 16, just west of Houston, B.C., at a place in Wet’suwet’en country that has come to be called the Unis’tot’en camp. It was Monday, Feb. 10.

For four days running, the RCMP had been making arrests at checkpoints and camps along the road in aid of enforcing an injunction aimed at allowing access to crews working on the right of way for the disputed Coastal GasLink pipeline, which is intended to carry natural gas from the Treaty 8 territory in the Peace River country to a massive new refinery near the town of Kitimat in Haisla territory on the coast.

The pipeline’s transit through the 22,000-square-kilometre traditional territory of the Wet’suwet’en people is opposed by most of the nation’s hereditary chiefs, but the project is supported to one extent or another by the elected Wet’suwet’en councils, and by all the other First Nation communities from Dawson Creek, east of the Rockies, to the Pacific Ocean. The $40-billion megaproject promises construction work for 10,000 people and as many as 950 full-time permanent jobs, and it comes with a variety of job training and benefits packages for the First Nations communities along the route.