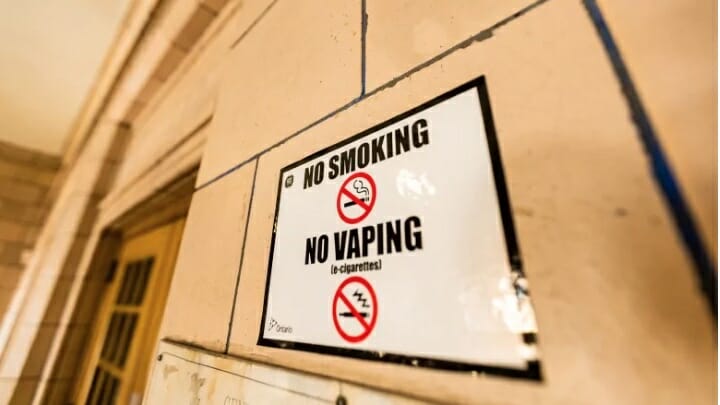 The bathroom doors are coming off, students are being hauled into the principal’s office and teachers are seizing charging devices in class as the vaping craze sweeps through Canadian schools.

“I would say it is out of control,” said George Kourtis, program co-ordinator for health and physical education at the Toronto District School Board.

He recalled the story of one student sent to the principal’s office for the third time for vaping. The principal was called away for a moment, leaving the confiscated vape device on the desk.

“He was out of there for 10 seconds and the child picked it up and vaped,” said Kourtis. “He asked the child, and he said, ‘Sir, it was standing right there, I had to.'”

Stories like that heighten concerns that vaping is creating a new generation of nicotine addiction, even as many hold out hope it will replace cigarettes and stop the ravages of tobacco-related death and disease.

Is it enough to be worried about? You’re damned right.
– David Hammond, public health professor, University of Waterloo

“It is why it’s such a wicked debate that we’re having,” said David Hammond, a researcher at University of Waterloo, Ontario, who has found evidence that youth vaping in Canada has increased dramatically.