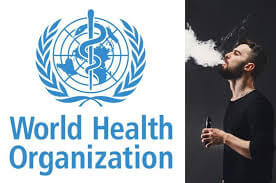 Agency will ‘miss the targets for reducing cancer, heart and lung disease’

For World No Tobacco Day 2020, an international group of independent experts with no conflicting links to the tobacco or vaping industry has sharply criticized the World Health Organization for its backward-looking approach to innovation and new technology, such as vaping products. Experts say they are exasperated by the WHO’s dogmatic hostility towards new technology and fear the U.N. health agency will squander the opportunity to avoid millions of premature deaths that will be caused by smoking.

“We know beyond reasonable doubt that vaping and other smoke-free nicotine products are very much less risky than smoking, and that those who switch completely see rapid improvements in their health. Yet the WHO continues to promote the outright prohibition or extreme regulation of these products. How can it make sense to ban the much safer product when cigarettes are available everywhere?”

The group expressed concern that WHO would miss key international objectives for reducing cancer, heart and lung disease.  The Sustainable Development Goals [1] require a one-third reduction in death rates from non-communicable diseases.  Emeritus Professor Robert Beaglehole of the University of Auckland, New Zealand and former director of WHO’s Department of Chronic Diseases and Health Promotion commented:

“Unless it does something different and embraces innovation in tobacco policy, WHO will miss the targets for reducing cancer, heart and lung disease by some distance.  Encouraging people to switch to low risk alternatives to smoking could make a large difference to the burden of disease by 2030 if WHO got behind the idea instead of blocking it.”

The longest-serving state attorney general in U.S. history, Tom Miller, who played a leading role in bringing the tobacco industry to account in groundbreaking lawsuit, claimed WHO has lost its sense of mission and purpose. Miller said:

“It’s as if the WHO has forgotten what it is there to do – to save lives and reduce disease. We can do that by helping and encouraging consumers to switch from cigarettes to lower-risk products. This means being honest about the much lower risks and by using smarter regulation to make switching more attractive.”

Iowa Department of Justice Office of the Attorney General – News Release – May 29, 2020.

Global Affliction | Intransigence in the Hierarchy of Public Health |...