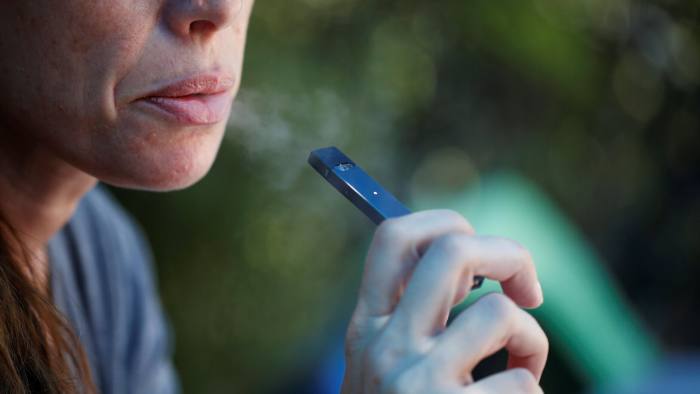 Please use the sharing tools found via the share button at the top or side of articles. Copying articles to share with others is a breach of FT.com T&Cs and Copyright Policy. Email licensing@ft.com to buy additional rights. Subscribers may share up to 10 or 20 articles per month using the gift article service. More information can be found at

Juul, the US start-up, launched the first in a series of bluetooth-connected e-cigarettes that can monitor users’ vaping and track their device as it seeks to stamp out fears around take-up of the activity among teenagers.

The Juul C1, as the device is known, started selling in the UK this week after a successful pilot in Canada.

Dan Thomson, managing director of Juul’s UK business, said that in order to use the device, which is linked to an app on users’ smartphones, customers had to go through stringent age verification checks that included facial recognition and two-step background check with third-party databases.

Juul has come under fire in the US for its high take-up among teenagers, which has prompted a crackdown on vaping by the US Food and Drug Administration. Last year the organization said the problem had reached “epidemic” levels.

Retailers are required by a Juul policy to ID check anyone who looks younger than 25. It is illegal to own a vape in the UK under the age of 18.

In June, San Francisco, where Juul is based, became the first US city to ban e-cigarettes in a bid to curb youth uptake.

Juul’s C1 device will allow users to monitor how many puffs they take a day, as well as locate their vape if they lose it. It also has an auto-lock option that means the e-cigarette can be locked when out of the phone’s range in order to prevent others using it.

Roxy Wacyk, director of product management at Juul, said the company had a “regular cadence of app updates” planned and that they were looking at features that allowed users to limit their vaping, and geofencing against usage in public areas such as schools.

However, privacy experts have raised concerns about the gathering of data required to develop the device.

“Data about the machine that goes back to the manufacturer can tell you a lot about the user and who that user is,” said Martin Garner, chief operating officer of the technology consultancy CCS Insight.

“The main risk is if that data gets out . . . you could identify the person from it . . . and that it could be health-related information, which is a super-sensitive area in GDPR,” he added.

“The objective of us designing this product was not for us to collect data per se. It was to be able to give data to customers,” said Mr Thomson.

Juul said it had “no plans at this time” to sell any data to other organizations.

“Usage data will never be shared or sold to third parties without a person’s explicit permission,” it said.

Juul, whose original parent company Pax Labs has developed a connected cannabis vaporizer, said it was the first one to market a nicotine vape “at scale”.

However, it will be competing with British American Tobacco, which launched its app-controlled vaping product Vype iSwitch in the UK in December.

BAT said it had sold more than 2,000 of these connected e-cigarettes but was still assessing the viability of the product.

Curate RegWatch
Secondhand exposure at home to the nicotine vapor from e-cigarettes is linked to a heightened risk of bronchitic symptoms and shortness...

NSW government tackling increasing problem of e-cigarette use in schools