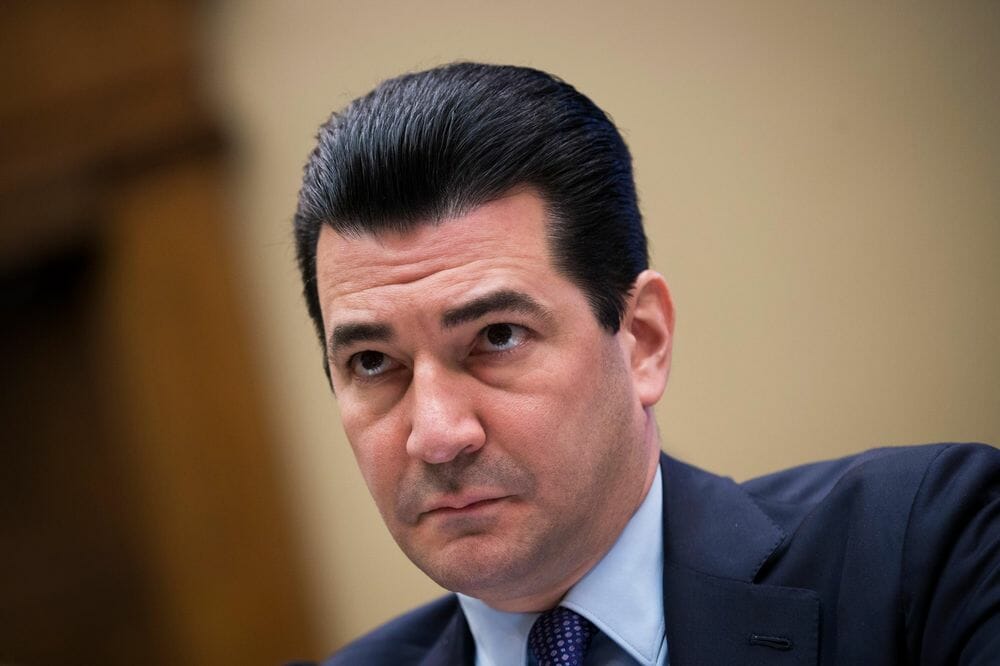 The White House supports a Food and Drug Administration effort to crack down on youth vaping and plans more regulations on tobacco products despite the departure of the agency’s chief, senior White House officials said in an interview Thursday.

FDA Commissioner Scott Gottlieb , 46, is leaving “only on the best of terms,” Mick Mulvaney, President Donald Trump’s acting chief of staff, said in an interview on Thursday. “I’m not aware of any policy dispute in the administration regarding Dr. Gottlieb.’’

Gottlieb’s resignation on Tuesday, which will take effect in about a month, sparked questions about what would happen to his effort to issue sharp new restrictions on e-cigarettes, flavored cigars and other tobacco products.

Next week the FDA’s goal is to officially propose one of Gottlieb’s signature policies: limiting the sales of most types of flavored e-cigarettes, according to a person familiar with the effort. By formalizing the limits on e-cigarettes before he leaves, the move could make it more likely that Gottlieb’s plan to stem what he called “an epidemic” of youth vaping will survive once an interim head takes over the 17,000-employee agency.

“Everybody agrees that there’s going to be more regulation in the tobacco space,” Joe Grogan, director of the White House Domestic Policy Council, said in the interview with Bloomberg. “We are extremely concerned about the public health consequences of vaping and e-cigarette use in kids.”

Shares of tobacco giant Altria Group Inc., which recently took a $12.8 billion stake in e-cigarette maker Juul Labs Inc., rose 1.1 percent at 10:29 a.m. in New York even as the broader market declined. The stock is up 12 percent this year.

Gottlieb’s resignation had been in the works for some time, according to several people familiar with the matter, and was partly driven by the timing of the release of the administration’s fiscal 2020 budget and subsequent meetings with members of Congress. He had grown tired of a long commute between his family and Connecticut, and had set in motion much of what he set out to do on tobacco and drugs, according to the people, who asked not to be named because the discussions were private.

The FDA’s longer-term goals are more ambitious. Gottlieb had called for cutting nicotine in cigarettes down to non-addictive, negligible levels. He has also sought to ban menthol, a flavor additive in some cigarettes. Mulvaney and Grogan declined to comment on those efforts.

The goal next week is also for the FDA to propose a policy that would no longer allow some flavored cigars to be sold without marketing clearance from the FDA, according to the person, who wasn’t authorized to discuss agency policy publicly.

Who’s Next?
Gottlieb’s abrupt announcement led to speculation about a search for a successor, someone who will need Senate confirmation. An acting commissioner will likely be named soon. Though Amy Abernethy, principal deputy commissioner, is the current No. 2 at the agency, she won’t be named as acting commissioner, an FDA spokesperson said.

Meanwhile, two potential contenders have emerged to replace Gottlieb, according to two people familiar with the matter:

Neither of the candidates has a well-known track record on tobacco, though Sharpless has supported Gottlieb’s e-cigarette efforts on Twitter.

The @US_FDA has taken several steps to curb the appeal of #ecigarettes to kids. A very positive measure to address this growing concern. @SmokefreeUs https://t.co/MmP3BEWGK9 pic.twitter.com/FZI28PF0cu

Whoever is chosen will have his or her work cut out. Gottlieb, a heavy user of social media to promote his agency, was savvy in navigating the rough terrain of the White House and Congress. He used his skills to propose increasing restrictions on tobacco in an administration that famously opposes increasing government regulation of industries. Those moves angered conservative lawmakers like Senator Richard Burr of tobacco-producing North Carolina.

Vaping in England: an evidence update including vaping for smoking cessation,...