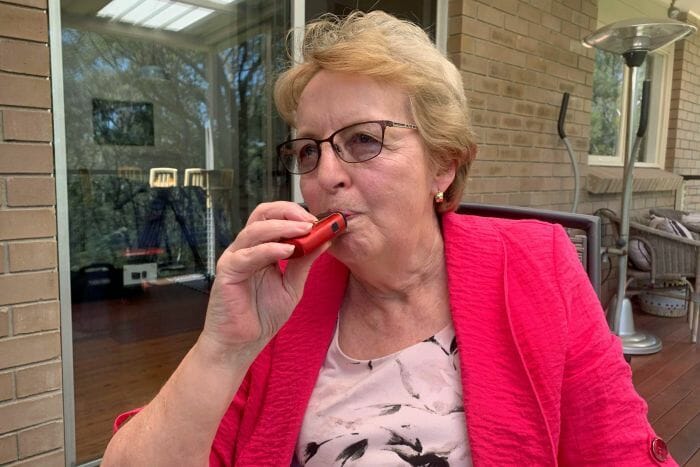 Vaping is just as harmful to human health as cigarettes, and even has the potential to cause lung cancer, scientists at the University of Tasmania have found.

The world-first study, published in the European Respiratory Journal, compared cigarettes and vaping on human cells, and found both equally toxic to the lungs.

“When we stimulate the cells with these new gadgets, they switch on to produce cancer-related proteins,” Dr Sukhwinder Sohal, from the University of Tasmania, said.

Dr Sohal advised against GPs recommending vaping to their patients.

“The cancer proteins are a big signal that we should not be promoting these as a safer alternative for people who want to do smoking cessation,” he said.

Dianne Gorman, 70, is one of an estimated 300,000 people who vape in Australia. After 40 years of smoking cigarettes she decided to give vaping a try.

“It was instantaneous. No cravings, no regrets, and I hadn’t expected to stop smoking. It was like a miracle,” Ms Gorman said.

Ms Gorman found a GP who supported her decision to vape.

“Having a doctor who knows about vaping is a great advantage. It makes it far easier to just go to the doctor and say, ‘I need a new prescription for nicotine’,” Ms Gorman said.

Brad McKay is among a group of Australian doctors who believe vaping is a better alternative to cigarettes.

“Is vaping the new methadone? I suppose at this point in time it’s a similarity,” Dr McKay said.

Dr McKay said he would support someone vaping if they had tried everything to quit without success.

But that position is at odds with the Australian Medical Association (AMA).

“This notion that you can just replace cigarettes with vaping is clearly a flawed one and we need to push back on that,” AMA vice-president Dr Chris Zappala said.

Dr Sohal said there was no evidence vaping was safe.

“A doctor who’s prescribing it has no idea what these liquids have in them,” he said.

“If someone dies tomorrow morning, who’s responsible for it?”

Vaping has been linked to at least 18 deaths and more than 1,000 cases of lung illness in the United States. Doctors say vaping with THC, a drug found in cannabis, increases the risks.

Last month, the US Centre for Disease Control issued a warning advising people to stop using vape products regardless of whether they contained nicotine or THC.

Pro-vaping doctors, the AMA and even some vapers are calling for greater government regulation to make the laws in Australia clearer.

“Some of the chemicals in e-liquids have been linked to cancer but it really depends where you’re getting the solution from,” Dr McKay said.

“We can certainly have regulation that stops those chemicals being in the liquid but at the moment it’s like the wild west, you have no idea what you’re getting.”

PHOTO: Dr Chris Zappala said the idea that cigarettes can just be replaced with vaping is a “flawed one”. (ABC News: Colin Hertzog)

“Part of the problem is we lack regulation in this space, from a medical point of view and a public health point of view,” he said.

Dr McKay said: “Even doctors are trying to keep up with what’s going on with the legalities.

“Every state has a different law, and every territory, and this creates a lot of confusion for the consumer.”

But for Ms Gorman, the options are clear.

“I’d be smoking if I wasn’t vaping, it’s as simple as that,” she said.

Brent Stafford
Adverse impacts of new regulation are a more dramatic way to describe unintended consequences. Yet, not all impacts are unintended. After...

Vaping advice is flawed and disastrous for public health