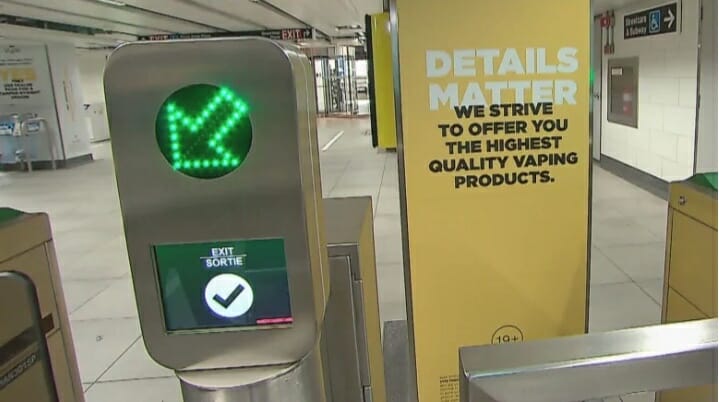 ‘I think it’s the correct step to take,’ president of the Canadian Vaping Association says

Transit users will no longer be seeing vaping ads on their bus and subway commutes after the TTC passed a motion to ban the ads on their property — a move it says will bring it closer in line with provincial and federal regulations on the promotion of vaping.

“You look at the flavours, you look at the way the marketing’s been done over the past months and years — you know bubblegum and dessert-flavoured vaping — and a lot of that stuff does seem to be targeted towards youth,” TTC board member Brad Bradford told CBC News.

“So, certainly that’s not something we want to be supporting,” said Bradford.

The move comes just weeks after the province of Ontario announced it will be banning the promotion of vaping products in convenience stores and gas stations starting in January. It also comes amid rising concerns about the health effects of vaping.

In the U.S., more than 1,600 cases of vaping-related illnesses have been reported, and at least 34 deaths have been linked to vaping. Reports of illness have also started to trickle in from the provinces after Health Canada issued a public warning earlier this fall.

‘I think it’s the correct step’

With approximately 1.7 million riders using the TTC daily, losing that kind of ad space might seem like it would be a blow to the vaping industry. But for Samuel Tam, president of the Canadian Vaping Association, that’s not the case.

“I think it’s the correct step to take,” he said, noting more than 10 per cent of riders are under the age of 19. “We don’t need our Canadian youth to be exposed to the advertising that’s out there.”

Curate RegWatch
The havoc wreaked by the COVID-19 pandemic is twofold: in addition to suffering direct effects of the virus, the world is...

Ontario to ban ads for vaping products in convenience stores