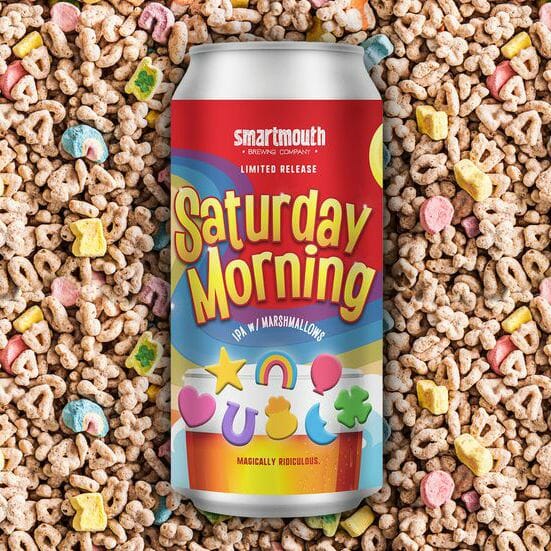 These days, when it comes to weird food, ask and you shall receive. Oreo is releasing Game of Thrones-themed cookies. Taco Bell debuted spicy steak fries. And a brewery in Virginia introduced a beer inspired by Lucky Charms cereal.

Smartmouth Brewing Company brewed up a new IPA using marshmallows just like those colorful, dehydrated chunks of sweetness you’d pick out of the Lucky Charms box. It’s called Saturday Morning, because that’s what Saturday mornings used to be for: Rushing downstairs at an ungodly early hour early to pour yourself the first of six bowls of sugary cereal while watching bad cartoons on the WB. Ah, the good old days.

To achieve the beer’s flavor flavor, Smartmouth said it added toasted marshmallows and cereal marshmallows to the mash. It teased a photo of Saturday Morning in an Instagram post.

Unfortunately, you’ll have to head down to Norfolk, Virginia, to get your sugar-rush-slash-alcohol-buzz, where Smartmouth is releasing the beer on Saturday, March 2. It will be available on draft at the brewery’s two locations and in 16 oz. cans in the city. According to Delish.com, the brewery is also hosting a series of events mark the launch of the beer, with board games, a comic-book stand, and a Super Smash Bros. Tournament.

Brent Stafford
It is said nature abhors a vacuum and in regard to vaping regulations in Canada, this maxim appears to hold true....